Match 33 of ICC Cricket World Cup 2019 will be seen the battle between the two teams – New Zealand and Pakistan at Edgbaston, Birmingham. Both the teams have such quality players that they are able to change the table single-handedly. New Zealand have won five games out of six where the one against India was washed out. Pakistan have registered only 2 wins so far out of six games. It will be interesting to see whether New Zealand will confirm their berth in the semi-finals or Pakistan will make an upset.

No injury news from both the sides so far.

Though there were showers on the eve of the game, the weather will be much better on the game day. There is a little bit moisture expected which will certainly help the bowlers.

Both the teams have met 8 times in the history of ICC World Cup where Pakistan won 6 times and New Zealand 2. The result clearly shows the dominance of Pakistan over New Zealand.

In the Dream 11 team for the ICC Cricket World Cup 2019 match, Sarfaraz Ahmed has been named the wicketkeeper. He is known to provide stability in the middle order.

Five batsmen have been selected on this Dream 11 team, Ross Taylor, Kane Williamson, Colin Munro, Babar Azam and Imam-ul-Haq. Though Colin Munro got dismissed on a duck, Kane Williamson and Ross Taylor have been in formidable form. Williamson has been dealing in centuries currently. On the other hand, Imam-ul-Haq has the ability to provide a flying start whereas Babar Azam can score big as well as able to anchor the innings.

The Dream 11 team also consists of two all-rounders, named Colin de Grandhomme and Mohammad Hafeez. Both of them are in good touch with both bat and ball. Their inclusion makes their respective sides stronger.

Three bowlers have been named in the Dream 11 team, named Matt Henry, Lockie Ferguson and Mohammad Amir. While Henry has taken 8 wickets so far, including a four-fer, Ferguson and Amir are the key bowlers of their respective sides. Ferguson took 14 wickets so far, including a four-fer while Amir bagged 15 wickets which included a five-wicket haul. They all are able to provide early breakthroughs for their respective teams. As the fast bowlers are dominating the tournament so far, it is expected that they will do well in the game as well.

Kane Williamson and Babar Azam have been chosen the captain and vice-captain of the Dream 11 team respectively of ES. 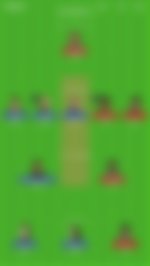