Match 29 of ICC Cricket World Cup will be seen the battle between two underdogs in the tournament, New Zealand and West Indies. While New Zealand have won all of their matches so far, West Indies managed only one win so far. This will be interesting to see whether the West Indies could break New Zealand’s winning streak or not.

No injury concern for New Zealand as of now while West Indies all-rounder is all set to miss the game against New Zealand due to his knee injury.

There is no chance of rain, it is expected to be a sunny day and the game will take place. As far as pitch is concerned at Old Trafford Cricket Ground, it is usually a batting pitch where batsmen will have the upper hand.

Both the team have met 7 times earlier in the ICC World Cup where New Zealand registered wins 4 times and West Indies 3. It will be interesting to see whether New Zealand can continue their lead or Windies equal the battle.

In the Dream 11 team for the ICC Cricket World Cup 2019 match, Nicholas Pooran and Sai Hope have been named the wicketkeepers as they both have been in great form. They can give a flying start as well as to anchor the innings till the end.

Four batsmen have been selected on this Dream 11 team, Martin Guptill, Kane Williamson, Chris Gayle and Shimron Hetmyer. Both Guptill and Kane Williamson have been in good touch where Guptill has scored a fifty and Williamson has already scored a hundred. On the other hand, though Chris Gayle is waiting for a big score, we all know how dangerous he could be. Hetmyer, however, is scoring on a regular basis for his side.

Three bowlers have been named in the Dream 11 team, named Trent Boult, Lockie Ferguson and Sheldon Cottrell. While Cottrell has been among wickets, Boult and Ferguson have been in a pretty good form with the ball. Ferguson has 11 wickets in his name, including a 4-wicket haul. All of them are expected to do well in the game.

Sai Hope and Lockie Ferguson have been chosen the captain and vice-captain of the Dream 11 team respectively of ES. 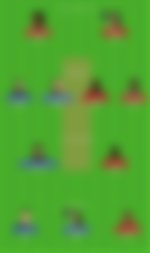