Match 21 of ICC Cricket World Cup will be seen the battle between South Africa and Afghanistan where none of them have won a single game in the tournament so far. Both of them lost three games each while South Africa’s last game was called off and due to which they have got 1 point from it and they will try to win the game against the comparatively weak team today and try to keep their hope alive for the semi-finals.

Lungi Ngidi is expected to be featured in South Africa’s playing XI for the match after an injury. From Afghanistan, Rashid Khan is expected to be match fit as he walked off with a concussion in their last match against New Zealand.

Though a couple of matches have been washed out due to rain, even it was heavy rain at Cardiff at noon on the eve of the game. But it is expected that the match could be placed as it is a day-night fixture. Due to rains, the pitch is under the cover. However, it is expected to be a seamer’s pitch which might not go with Rashid Khan’s spin.

Both the teams haven’t met earlier in the World Cup campaign but both the team didn’t have a good record from their last five One Day International games where both of them managed to win one game each. South Africa’s last win came in March during an ODI series against Sri Lanka while Afghanistan last won against Ireland in their World Cup preparation series.

In the Dream 11 team for the ICC Cricket World Cup 2019 match, Quinton de Kock is the best choice as a wicketkeeper, keeping his current form in mind. He has already scored a fifty in this tournament and has been among runs.

Five batsmen have been selected on this Dream 11 team, Hashim Amla, Faf du Plessis, Noor Ali Zadran, Hazratullah Zazai and Hashmatullah Shahidi. Shahidi has scored a fifty in this tournament while Zazai too has been among runs. Though Hashim Amla needs to be more attacking in his approach, du Plessis has been scoring in almost every games.

The Dream 11 team also consists of two all-rounders, named Mohammad Nabi and JP Duminy. While Nabi has been among wickets, including a 4-wicket haul against Sri Lanka, Duminy has been scoring runs well. Both of them has the ability to do well for their respective sides.

Three bowlers have been named in the Dream 11 team, Rashid Khan, Kagiso Rabada and Hamid Hasan. Rashid Khan is one of the finest spinners in the World Cricket right now and his googly can trouble any batsman. Along with him, his teammate Hasan is also economical so far in the tournament. The third one is Kagiso Rabada, whose ability to dismantle the opponent’s line up is unquestionable. In Dale Steyn’s absence, he is doing his job pretty well with Lungi Ngidi for the Proteas.

Faf du Plessis and Mohammad Nabi have been chosen the captain and vice-captain of the Dream 11 team respectively of ES. 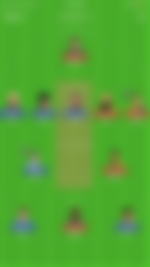