Match 23 of ICC Cricket World Cup will be seen the battle between two underdogs – West Indies and Bangladesh at The Cooper Associates County Ground, Taunton. So far in 2019 World Cup, West Indies won against Pakistan and lost to Australia and England whereas the game against South Africa was called off. On the other hand, Bangladesh won against South Africa and lost to New Zealand and England whereas their game against Sri Lanka was abandoned.

Already a couple of matches have been washed out due to rain and both the team have suffered that. The forecast for Taunton though shows clear and the sun might come out. The pitch will help the fast bowler whereas small boundaries will help the batsmen.

Both the teams have met 4 times in the history of ICC World Cup where West Indies registered convincing win 3 times and one game was no result. Both the team will try to win the game to keep them alive in the tournament.

In the Dream 11 team for the ICC Cricket World Cup 2019 match, there are three wicketkeepers have been chosen, named Sai Hope, Nicholas Pooran and Mushfiqur Rahim. All the three have been scored the fifties in the ongoing tournament and are among runs. They have the ability to steer the game to the end.

Three batsmen have been selected on this Dream 11 team, Soumya Sarkar, Shimron Hetmyer and Chris Gayle. While Sarkar is able to provide a good start to his team, Chris Gayle is known for his big hitting ability who can punish any bowler in the world and can be very dangerous on his day. Even, Hetmyer also has been in form. He can stabilize the innings in the middle-order.

The Dream 11 team also consists of two all-rounders, named Shakib Al Hasan and Andre Russell. Both have been in formidable form. Shakib already smashed a century in the ongoing tournament as well as taking regular wickets whereas Russell, despite having an issue on the knee, he has been scoring and taking wickets flawlessly. Both can change the game single-handedly for their respected sides.

Three bowlers have been named in the Dream 11 team, Sheldon Cottrell, Oshane Thomas and Abu Jayed. Thomas already picked up a 4-wicket haul whereas Cottrel also has been among wickets. Both are known for providing early breakthroughs. On the other hand, Abu Jayed is expected to get a chance in the game.

Shakib Al Hasan and Sai Hope have been chosen the captain and vice-captain of the Dream 11 team respectively of ES. 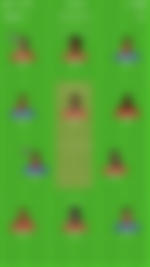