Match 35 of ICC Cricket World Cup 2019 will witness a battle between Sri Lanka and South Africa at Riverside Ground, Chester-le-Street. While Sri Lanka have a slight chance of qualifying as they have 6 points from 6 games. South Africa have already ruled out of the tournament as they have managed to won only one game so far. It would be interesting to see whether Sri Lanka could win the game or South Africa managed to do another upset.

No injury news from both the sides so far.

The weather will be clear and fans can enjoy a full 50-over game. The pitch will help the batsmen and it is expected to be a high scoring game.

Both the teams have met 5 times in the history of ICC World Cup where South Africa registered wins 3 times and Sri Lanka 1. The rest of the game went on a tie. The result clearly shows the dominance of South Africa over Sri Lanka.

In the Dream 11 team for the ICC Cricket World Cup 2019 match, Kusal Mendis and Quinton de Kock have been named the wicketkeeper, keeping their recent form in mind. While de Kock is known to provide a flying start, Kusal Mendis can anchor the innings in the middle pretty well.

Five batsmen have been selected on this Dream 11 team, Dimuth Karunaratne, Avishka Fernando, Faf du Plessis, Rassie van der Dussen and Aiden Markram. Dimuth Karunaratne has been giving a steady start to Sri Lanka from the beginning whereas Faf du Plessis has been scoring constantly. Rassie van der Dussen and Aiden Markram also performing well with the bat and have the ability to steady the ship in the middle. As South Africa are out of the tournament, players are expected to play without pressure.

The Dream 11 team also consists of one all-rounder, named Andile Phehlukwayo. He has been scoring quickfire runs as well as taking wickets which proved to be beneficial for the team.

Quinton de Kock and Faf du Plessis have been chosen the captain and vice-captain of the Dream 11 team respectively of ES. 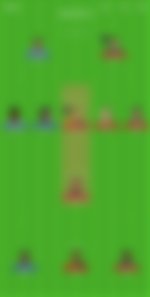