Paddy Pimblett is one of the most popular MMA fighters in England and is a former Cage Warriors Featherweight champion. This was the same organization where Conor McGregor was a champion before he moved to the UFC.

Pimblett has always wanted to sign with the UFC, and now a deal between Paddy ‘The Baddy’ and the Dana White’s promotion is done.

Paddy Pimblett signs with the UFC

Both the UFC and Cage Warriors both tweeted from their official accounts, confirming the deal between Pimblett and the UFC.

IT's OFFICIAL: @PaddyTheBaddy has signed for the UFC! We wish you all the best in the UFC Paddy! #UFCPaddy https://t.co/O5uoKMDLRZ

Pimblett said, “The fighters in the UFC best be ready for me, I’m not signing to mess about, I’m coming to be the champion, then I’m taking the UFC to Anfield.”

He said, “BJJ Black Belt, a Cage Warriors Champion and notched up a Professional MMA record of 16 wins in 19 fights and just 26 years old. Eight years watching him grow & develop into the man he has become. U were 18 when I met you on your pro debut on (Cage Warriors) Congratulations young man.”

Popular pro-MMA fighter Guram Kutateladze also welcomed Paddy. He shared a post on his Instagram and said, “Please, let me welcome new superstar (Paddy Pimblett) to the UFC in June. And see how baddy he is?!”

Pimblett will most probably compete in the featherweight division of the UFC. The division is already filled with outstanding talents like Volkanovski and Holloway.

Paddy talked about his UFC debut, and was confident in claiming that if the UFC put him against another debutant, he would comfortably win. Hence, Pimblett believes he should face someone who has fought at least 10 UFC fights. 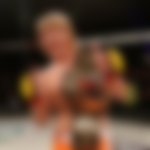 He said, “If I get put against a fellow debutant, it’s gonna end very badly for them, you know what I mean, You’re gonna have to get me someone who’s had about 10 UFC fights.”

Paddy ‘The Baddy’ is fantastic, he has an impressive MMA record of 16-3, and his latest wins are a sign of his hunger and commitment. UFC is arguably the top MMA Promoter in the world, and it would be great to see an exciting talent like Pimblett competing there.

Paras Pande is a UFC author at EssentiallySports who is pursuing his graduation in Journalism and Mass Communication. An ardent follower of the UFC, he has been covering the sport for 2 years now. Before joining the team at EssentiallySports, Paras gained expertise as an MMA writer whilst working with Sportskeeda.
ARTICLES BY AUTHOR