The weekend boasts of an excellent encounter with a DC vs RCB clash on the cards on Sunday afternoon. The battle for the top 4 and the playoffs slot continues with the Delhi Capitals aiming for a top 2. Ahead of this match, The Capitals will be aiming to cement their 2nd position in the league table or catch the Chennai Super Kings. In the meantime, Bangalore simply want to get their season in shape.

Tomorrow evening’s IPL 2019 match will see DC with the home crowd cheering them on at the Kotla and ES will help with the Dream 11 Predictions in case fans are still unsure.

Both teams head into this DC vs RCB match on the back of wins over Rajasthan and Punjab. However, RCB will be slightly hobbled with Dale Steyn being ruled out due to injury.

Since it is an afternoon match, temperature are likely to start at a blistering 43°C. Luckily, as the match progresses, things will start to cool down to at least 36°C. There is also the likelihood of low humidity, which can make things tougher for the players.

The Kotla is generally favourable to the chasing team, but the last few games had plenty of dew. Since it will be sunny, the conditions in Sunday’s game will be a whole new ball game.

There have been 22 DC vs RCB ties with Bangalore having nearly double the wins in the head to head scene. The Royal Challengers have sealed 14 wins to the Capitals’ 7, with a solitary non-result. Currently, the pendulum can swing either way, as both teams have won their last game. The highest score statistic goes to RCB, having scored 215 to RR’s 194. The lowest score statistic sees them romp ahead with 147 to Delhi’s 95.

Rishabh Pant gets the nod ahead of Bangalore’s Parthiv Patel. The 21-year old wicket-keeper/batsman has 336 runs including an unbeaten 78*. He also has a strike rate of 163.10 and he can be a crucial player in this encounter.

Two all-rounders make the DC vs RCB list, with Washington Sundar and Axar Patel from RCB and DC respectively. Sundar has played only one match with no wickets in hand and an economy of 10.50. Meanwhile, Patel has 81 runs and 7 wicket at an economy of 7.15.

The one leading this DC vs RCB Dream 11 side is none other than Virat Kohli and Shikhar Dhawan will be the second in command. 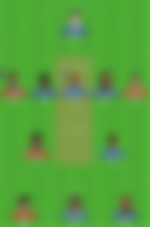