On Friday night, the Kolkata Knight Riders and the Kings XI Punjab will square off in Mohali. This KKR vs KXIP clash is merely for pride as both teams are far away from a playoffs slot. The match will be held at the IS Bindra stadium in Mohali, handing the Kings XI Punjab the home advantage. However, both teams have lost their last match, so the KKR vs KXIP result can swing either way

As mentioned before, both teams have been defeated in their last game. Neither team has anything to gain as a win will not affect the playoffs positions.

The IS Bindra Stadium in Mohali is expected to be a batsman’s haven and dew will also play a big role. As a result, the chasing team will likely be at an advantage when the match plays out.

However, on Friday night, the weather is expected to be cloudy, which could cancel out the dew factor. With regard to temperature, it is set to range in the 30s during the match.

There have been a total of 24 KKR vs KXIP clashes with Kolkata’s lead in the head to head scene nearly double. In other words, the Knight Riders have taken 16 wins to the Kings XI Punjab’s 8. As of now, the momentum likely swings towards Punjab inspite of losses for both teams in their last game. This is because the Knight Riders have been on a losing streak.

In the ES Dream 11 team, Nicholas Pooran gets the nod ahead of KKR’s Dinesh Karthik. Pooran has 84 runs including a high score of 46 from 5 matches. He also has a strike rate of 144.82 and he can be a key player for the Kings XI in this encounter.

For the ES Dream 11 bowling trio, the Knight Riders have two players once again, namely Prasidhe Krishna and Sandeep Warrier. The remaining spot is occupied by Punjab’s Murugan Ashwin. Krishna has picked up 3 wickets at an economy of 9.50 while teammate Warrier boasts of an economy of 7.25 inspite of not having any wickets in just one match. On the other end of the spectrum, Ashwin has 5 wickets at an economy of 6.82 .

Captaining the two teams are Dinesh Karthik and Ravichandran Ashwin, but for ES’ Dream 11 team, Andre Russell is chosen to lead while Chris Gayle is the Vice Captain. 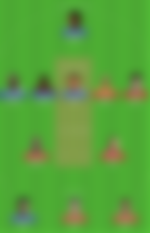