Tonight’s IPL 2019 match will be a MI vs SRH showdown as both teams tussle for a playoffs berth. The match will be held at the Wankhede stadium, handing the Mumbai Indians the home advantage. However, both teams have won their last two matches, so the MI vs SRH result cane swing either way

As mentioned before, both teams has sealed victory in their last two games. This game is literally crunch time as a win will send the Mumbai Indians into the playoffs. On the other hand, a Sunrisers win will leave things as all to play for once again.

Even though the match takes place in the evening, heat will be a big issue. In addition to that, humidity will be quite high and with that is the presence of dew. This will likely affect bowlers especially in the second innings.

The Wankhede pitch tends to be a flat track, though there is a bit of turn. Also, since there will likely be dew, circumstances will be a lot different.

In IPL 2019, there have been a grand total of 13 MI vs SRH matchups, with the Sunrisers narrowly edging out the Mumbai Indians. In other words, the Sunrisers have chalked up 7 wins to the Indians’ 6.

In the ES Dream 11 team, Quinton de Kock gets the nod ahead of SRH’s Wriddhiman Saha, especially in the wake of the absence of Jonny Bairstow. De Kock has 393 runs including a high score of 81. He also has a strike rate of 136.45 and he can be a key player for the Capitals in this encounter.

Among the batting quartet in ES’ MI vs SRH Dream 11, two are Mumbai players, namely Suryakumar Yadav and Rohit Sharma. Martin Guptill and Manish Pandey represent Hyderabad in this MI vs SRH clash. Skipper Sharma has a 67 to his name at a strike rate of 131.75 while Yadav has a high score of 59 at a strike rate of 128.70.

Three all-rounders make the ES Dream 11 MI vs SRH list, with the honour going to the Pandya brothers for the Mumbai Indians. Hardik has 355 runs and 10 wickets in hand at an economy of 9.68. Meanwhile, teammate and brother, Krunal has 167 runs and 9 wickets at an economy of 7.70.

Finally, the Sunrisers have Mohammad Nabi who has 60 runs and 7 wickets at an economy of 6.10.

Captaining the two teams are Kane Williamson and Rohit Sharma, but for ES’ Dream 11 team, Sharma is chosen to lead while Manish Pandey is the Vice Captain. 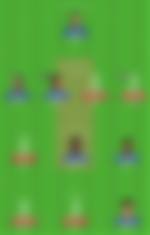