On Wednesday night, a newly rejuvenated Royal Challengers Bangalore clash with the Kings XI Punjab. This RCB vs KXIP match is important in terms of the playoffs positions, particularly for Punjab. However, Bangalore have nothing to lose and are treating this for bragging rights. Punjab are tied on 10 points apiece, along with the Sunrisers Hyderabad, are are currently facing the Chennai Super Kings.

Tonight’s IPL 2019 match will see RCB with the home crowd backing them and ES will help with the Dream 11 Predictions in case fans are still unsure.

The Royal Challengers come into this match on the back of a win against the Chennai Super Kings in a thriller. However, Punjab lost their last match to Delhi, but will be looking for redemption in this RCB vs KXIP clash.

The scene for tomorrow night’s RCB vs KXIP match will be set at the M Chinnaswamy Stadium. With regard to weather, if the forecast is correct, things will remain dry and the match uninterrupted. The temperature is set to range between 25°C and 30°C and humidity will not be a problem.

The M Chinnaswamy pitch is generally a batting track and runs come thick and fast. However, even bowlers have had a good time at the batting track.

In the IPL’s 12 year history, there have been 23 RCB vs KXIP showdowns with Punjab barely leading. The Kings XI have clinched 12 wins to Bangalore’s 11, and the momentum is with RCB, having been on a roll and with nothing to lose. The highest score statistic goes to KXIP, having scored 232 to RCB’s 226. The lowest score statistic sees them behind with 84 to Bangalore’s 88.

Parthiv Patel is pitted against KL Rahul in this RCB vs KXIP collision course. However, Rahul gets the nod in the Dream 11 side, having amassed 399 runs including an unbeaten 100*. He also boasts of a strike rate of 127.88.

Two all-rounders make the RCB vs KXIP list, with Moeen Ali and Marcus Stoinis from Royal Challengers. Ali has 216 runs and 5 wickets at an economy of 6.68. Stoinis has 133 runs and 1 wicket to his credit at an economy of 9.25.

The one leading this RR vs DC Dream 11 side is Chris Gayle and Virat Kohli will act as the deputy. 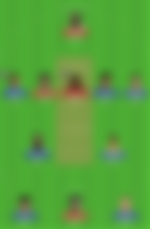