Match 49 of IPL 2019 will be a RCB vs RR clash tonight as the battle to stay off the bottom of the table continues. Rajasthan and Bangalore have nothing to lose except for their pride as they are 7th and 8th place in the IPL 2019 table.

Tonight’s IPL 2019 match will see RCB with the home crowd egging them on at the M Chinnaswamy Stadium and ES will help with the Dream 11 Predictions in case fans are still unsure.

Both teams head into this RCB vs RR match on the back of mixed results, with a loss for RCB and a win for RR. The Royals sealed victory in their last match against the Sunrisers Hyderabad, while the Royal Challengers Bangalore lost to the Delhi Capitals.

Interestingly, there are chances of rain, to be precise, at least a 51% chance. Also, the temperature will likely be hovering around 24°C. In addition to that, owing to the rain, there will likely be plenty of humidity and dew.

The Bangalore pitch does not look favourably on the bowlers while batsmen have a whale of a time. However, it does produce a significant amount of turn, which bowlers will be grateful for. So, a high-scoring match is expected tonight.

There have been 20 RCB vs RR ties with Rajasthan edging out Bangalore in the head to head scene. The Rajasthan Royals have sealed 10 wins to the Royal Challengers 8, with two ending in a non-result. As of now, the pendulum swings towards the Royals as they have won their last match. The highest score statistic goes to RR’s side with 217 to RCB’s 200. The lowest score goes in the other direction with 70 to Rajasthan’s 58.

Parthiv Patel gets the nod as wicketkeeper ahead of Sanju Samson. The 34-year old wicket-keeper/batsman has 365 runs including a high score of 67. He also has a strike rate of 140.38 and he can be a key player for the Royal Challengers in this encounter.

The one leading this RCB vs RR Dream 11 side is Virat Kohli with Ajinkya Rahane taking on the role of vice captain. 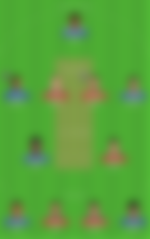