The new week opens up with a SRH vs KXIP encounter tonight. The battle for the top 4 and a playoffs berth continues with the Sunrisers Hyderabad eager to consolidate their 4th place in the IPL 2019 table. In the meantime, Punjab also stand an outside chance of a top 4 slot.

Tonight’s IPL 2019 match will see SRH with the home crowd egging them on at the Rajiv Gandhi Stadium and ES will help with the Dream 11 Predictions in case fans are still unsure.

Both teams head into this SRH vs KXIP match on the back of losses. The Sunrisers lost their last match to the Rajasthan Royals, while the Kings XI lost to the Royal Challengers Bangalore.

Since the match takes place in the evening, temperatures will be a lot cooler, though it will range between 31°C and 34°C. Also considering that humidity will be quite low but there will still be a dew factor.

The Rajiv Gandhi pitch will likely be advantageous for batsmen but can tend to slow down. However, even spinners can enjoy themselves on this pitch, so batsmen need to be wary.

There have been 13 SRH vs KXIP ties with Hyderabad dominating the head to head scene. The Sunrisers Hyderabad have sealed 9 wins to the Kings XI’s paltry 4. Currently, the pendulum swings towards the Sunrisers as they are higher in the table, it also helps that it is a home game for them. The highest score statistic goes to KXIP’s side with 211 to SRH’s 207. The lowest score goes in the other direction with 121 to Punjab’s 119.

Nicholas Pooran is the first-choice wicketkeeper ahead of Wriddhiman Saha. The 23-year old wicket-keeper/batsman has 63 runs from 4 matches including a high score of 46. He also has a strike rate of 131.25 and he can be a key player for the Kings XI Punjab in this encounter.

A lone all-rounder makes the SRH vs KXIP list, with the honour going to Vijay Shankar for SRH. Shankar has 173 runs and 1 wicket in hand at an economy of 7.71.

On the other end of the spectrum, Ashwin has 4 wickets at an economy of 6.64 and Ayachi could be making his IPL debut.

The one leading this SRH vs KXIP Dream 11 side is David Warner with Chris Gayle taking on the role of vice captain. 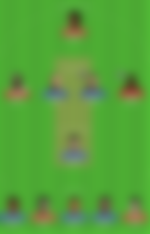