The weekend kicks off with a SRH vs RR clash in IPL 2019 as the battle for the top 4 and the playoffs slot heats up. This SRH vs RR match is important for both teams in terms of the standings. The Sunrisers will be aiming to cement their 4th position in the league table. In the meantime, Rajasthan simply want to move up from 7th place.

Tonight’s IPL 2019 match will see RR with the home crowd cheering them on and ES will help with the Dream 11 Predictions in case fans are still unsure.

The Royals come into this match in the wake of a win over the Kolkata Knight Riders. Sunrisers, on the other hand lost their last game, which was against the Chennai Super Kings.

The stage is set for tomorrow night’s SRH vs RR match and the battle ground will be the Sawai Mansingh Stadium. Heat will be a massive issue in Jaipur though nights are expected to be cooler. However, temperatures will range in the area of 35 -36° C.

The Sawai Mansingh Stadium is generally a high-scoring venue, if the previous game against Delhi Capitals was any proof. So, this SRH vs RR game will likely be a high-scoring one as well.

There have been 10 SRH vs RR clashes with Hyderabad leading the head to head scene. The Sunrisers have sealed 6 wins to the Royals’ 4, with no non-results. Currently, the momentum is with the Royals, who have won their last game. The highest score statistic goes to SRH, having scored 201 to RR’s 198. The lowest score statistic sees them romp ahead with 127 to Rajasthan’s 102.

Sanju Samson gets the nod as the Sunrisers will be without the services of Jonny Bairstow. in this SRH vs RR tie. The Kerala-born wicket-keeper/batsman has 261 runs including an unbeaten 102*. He also has a strike rate of 147.45 and he can be a key player in this encounter.

Among the three batsmen, two are Sunrisers players, namely Martin Guptill and Manish Pandey. Ajinkya Rahane is the sole representative for the Royals. Guptill has not played a single match this season and has been called up in the absence of Jonny Bairstow. Pandey on the other hand, has a score of 83* at a strike rate of 128.03.

The one leading this SRH vs RR Dream 11 side is Ajinkya Rahane and Martin Guptill will act as the deputy. 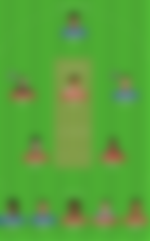