Published 02/25/2016, 12:59 PM EST
Time has shown us some great players coming through Manchester United’s youth academy. From those kids who played wearing the Red shirt for this club, to the Class of ’92, they have all made the club what it is and they take pride in calling themselves a product of the youth system. Although the new price cuts and controversies have had an impact, the club still boasts some amazing youth prospects who have the talent to make it to the top.

Here are five  players from Manchester United academy who have the potential to make it big and are yet to make an impression while playing for the first team:

Will Keane
The Englishman has been to Wigan, Sheffield United and Preston North End on loan and has returned to the club making some headlines this year. The Forward has scored 10 times in 6 games for the Under-21s. Louis van Gaal has been criticized for sending James Wilson on loan and not using him a couple of times. The lack of strikers in the United squad was to be his chance but that hasn’t happened as of yet.
http://https://www.youtube.com/watch?v=EIJ5ZOBreXQ
Keane recently scored 5 goals against Norwich U-21 in a seven-nil victory for Manchester United which only spurred greater  appreciation for him and more pressure for Van Gaal to give him a chance.
Andreas Pereira
Pereira first caught everyone’s eye when he scored an amazing goal against Serbia in the Under-20 World Cup for Brazil. Since then, it hasn’t really been an uphill ride for him. He has been performing well for the Under 21 squad but it wasn’t enough to impress Van Gaal to force him off the bench. The Brazilian has made a few appearances for the first team, but failed to make it count.
In line with what one would expect from a Brazilian, he has nice ball control and great vision.
Fosu-Mensah
The 18-year-old has been one of the most exciting players in the youth academy since his move from Ajax in 2014. The defender has played a variety of positions and has proved how versatile he really is. He has played as a Right Back, Center Back, Defensive Midfielder and also a Left Back. Fosu-Mensah is 6’2” and is quite strong for an 18-year-old player who is trying to find his feet in the English game.
He is quick and reads the game really fast but he is not be confused with Pogba. While he has the ability to make it as big as Pogba, Fosu is a far-more defensive player than him.
Roshaun Williams
Roshaun signed for Manchester United when he was 9 years old and has been a rock at the back for many United age groups and despite being a defender, he’s actually known to have blistering pace. The English defender captained the Under-18s and has been given a few chances for the Under-21s too. He has been phenomenal and looks to be one for the future. There’s no doubt that in the coming three to five years, Fosu and Roshaun will be knocking on the doors of the Manchester United manager for a place in the first team. 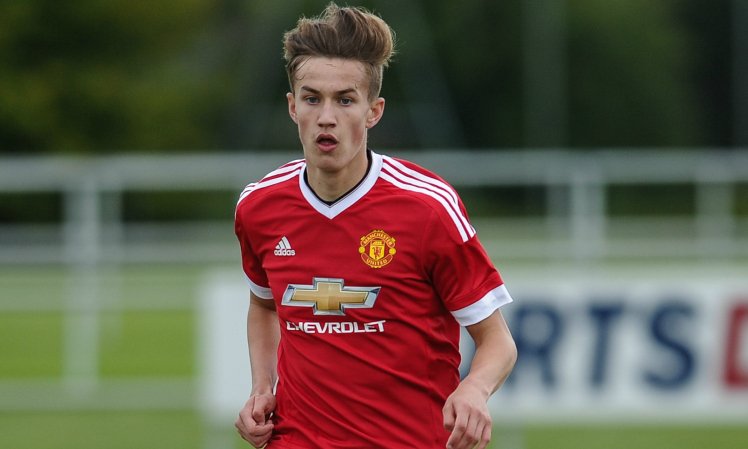 The England youth team was left ‘breathless’ when it saw Callum Gribbin play. The Forward is just 17-years old right now but has already featured for the Under-21s. The Manchester United forward has often been termed as a ‘special’ talent by coaches and spectators, and the stats prove it too. The teenager already has a lot of fans and even had rivals Liverpool and Manchester City line up with offers for him; he signed a four-year contract extension at United instead.

He is known to have amazing skill and presence which leaves the defender either stranded or sends them the wrong way.

More from EssentiallySports on FA Cup