Maradona – More than a Religon

This is the story of a young boy from the suburbs of Buenos Aires, a boy that came from humble beginnings, that grew up to carry the weight of the hopes and dreams of an entire nation and lead them to glory. The story of a pint-sized boy who ended up with a religion created in his honour. Love him or hate him, the world marveled at the genius of Diego Armando Maradona. El Pibe de Ora (The Golden Boy), as he is often called, was perhaps one of the most exciting players to step onto a football pitch.

With a career peppered with numerous incidents, it’s a wonder the little fella never had time to grow up. In 590 senior appearances, scoring 311 goals, Maradona has never done things by halves and now he sits at the top of the list of the diddy men that impressed the world of football, looking down on the others, for perhaps the first time in his life.

A precocious talent, he was scouted at an early age of 8, he joined Los Cebollitas (The Little Onions) the junior team of the Buenos Aires’s Argentinos Juniors. From amusing crowds at half-time with his ball tricks for the first division matches, he went on to win many laurels for the country and many a club.

Having started his illustrious career at Argentinos Juniors, he scored 115 goals in 167 appearances for the club, a phenomenal feat for a youngster. An advanced playmaker, with exceptional skills with the ball, he quickly rose through the ranks and attracted the attention of many clubs, with River Plate even offering to make him their highest paid player. Maradona, however, refused and went on to sign for Boca Juniors, an elite Argentine club, one he had always expressed a will to play for. He had a short but successful stint here having helped the team win the league that year, and would soon move on to bigger and better things.

In 1982, Maradona was selected for his first World Cup tournament. Argentina were defending champions and many were looking to the team to repeat their performances from four years prior. Despite Maradona bagging two goals, he couldn’t help his team go further than the second round. However, at just 21 he had experienced his first World Cup, playing every minute until he was sent off against Brazil with just five minutes left on the clock. Nonetheless, his brilliance on the pitch did not go unnoticed as Barcelona came a-knocking.

He signed for the Catalan giants for a record transfer fees of £5 million. Under the guidance of César Luis Menotti, Maradona and Barcelona won the Copa del Rey, beating Real Madrid, and the Spanish Super Cup, beating Atletico Madrid in 1983.
His most glorious moment, at Barcelona, is undoubtedly the El Clásico on June 26th, 1983, a game where he scored and became the first Barca player to be applauded by Madrid fans. And what a goal it was! With his typical flair and panache, he dribbled past the Madrid goalkeeper Agustin, and as he approached an empty goal he paused as Madrid defender Juan Jose came sliding at him only to crash against the post at which point Maradona slotted the ball neatly into the net and the stadium erupted in a joyous uproar.

The revered El Classico goal, one no one can forget

Alas, his time at Nou Camp didn’t turn out as well as planned. An illness and a career threatening injury almost laid waste to the large sum expended. Maradona, though, didn’t let this get in his way and was soon back to strutting his stuff on the pitch. But his problems off the pitch didn’t cease. Frequent disputes with the club board, a victim of xenophobic comments and rumored cocaine abuse were enough for him to request a transfer.
He departed for Serie A side Napoli for yet another record transfer fee of £7 million. It was here that he enjoyed his most successful period as a player and guided the side to their most successful time in the history of the club. Napoli fans had rightly exclaimed on his arrival-“Our savior has arrived”.  This was a time when Italian football was dominated by teams from the north such as Milan, Juventus, and Roma. No team from the south had ever won the league.
At a time when the tensions between the north and south parts of Italy were at their peak, so was Maradona. He inherited the captain’s band from veteran defender Giuseppe Bruscolotti. Armed with his extraordinary dribbling skills, great vision, quick reflexes and fearless attitude, he led Napoli from the frontlines and they emerged as the Serie A league champions in the 86/87 season.

Maradona’s best moves while he adorned the No. 10 jersey of Napoli

He revolutionized Italian football. With the magical attacking trio of “Ma-Gi-Ca” comprising of himself, Bruno Giordano and Careca, Napoli went on to win their second title in 89/90 and finished runners-up twice. Additionally, during his era, Napoli won the Coppa Italia(1987), the UEFA Cup(1989) and the Italian Supercup(1990). He remains their top goal scorer till date with 115 goals despite being an attacking midfielder.
His finest hour arrived during the 1986 World when he captained Argentina to the title of World champions, as they won the final versus West Germany in New Mexico city. Asserting his dominance, Maradona was the most dynamic player throughout the tournament. Playing each minute of every Argentine game, he scored 5 goals, having assisted another 5.
It was in the quarter final, he scored two contrasting goals against England that showcased his two sides better than ever, and his legend was cemented. The majesty of his second goal and the notoriety of his first led to the French newspaper L’Equipe describing Maradona as “half-angel, half-devil”.
Played with the background of the Falklands war between Argentina and the United Kingdom, the match started an international rivalry that still remains fiery. His first goal was termed as the infamous “Hand of God”. The replays indicated that he had scored the goal by striking the ball with his hand. The referee, however, allowed the goal. Maradona was coyly evasive, describing it as “a little with the head of Maradona and a little with the hand of God”.

The Hand of God

Subject to much controversy, ultimately, on 22 August 2005, Maradona acknowledged on his television show that he had hit the ball with his hand purposely, and no contact with his head was made and that he immediately knew the goal was illegitimate. Despite this, the goal stood much to the wrath of English players.
Nonetheless, his second goal was nothing short or genius as he scored the winner just 4 minutes after his much-disputed goal. Receiving the ball in his half, he swiveled around, and with just 12 touches ran more than half the pitch, sublimely dodging and dancing past 5 English outfield players (Peter Beardsley, Steve Hodge, Peter Reid, Terry Butcher and Terry Fenwick) before he left goalkeeper Peter Shilton on his back with a feint, as he slotted home the winner. The goal was voted the “Goal of the Century” by FIFA in 2002.

Maradona’s goal of the century

Subsequently, the charm and shine of the “Barrilete Cósmico” (the Cosmic Barrel) faded. He played in another two World Cups, taking them all the way to the final in 1990, where they unfortunately lost. Facing drug related issues and a rocky personal life, he left Napoli in a disgraced fashion. He moved around after that, playing for Sevilla, Newell’s Old Boys and Boca Juniors in his final years. The 1994 world cup saw him fail a drug test and consequently sent home.

Unlike his playing career, which was filled with numerous achievements, awards, accolades, much genius and spectacular goals, Maradona’s attempts as a manager were lackluster. He had short, rather unsuccessful stints at Argentina Juniors, Mandiyú, Racing Club and Al Wasl FC.
He was even appointed the coach for Argentina in 2008 with whom he did not fair well. Barely managing to qualify for the World Cup and then scraping past the group stage they were routed by Germany in the Quarter Finals, which ultimately lead to his dismissal.

Maradona’s exceptional vision, passing, ball control, dribbling skills, speed, reflexes and reaction time were combined with his small size giving him a low center of gravity which allowed him to be more maneuverable than most other football players; he would often dribble past multiple opposing players on a run. His presence on the pitch had a great effect on his team’s general performance, while he would often be singled out by the opposition.
One of Maradona’s trademark moves was dribbling full-speed on the right wing, and on reaching the opponent’s goal line, delivering accurate passes to his teammates. Another trademark was the rabona, a reverse-cross pass shot behind the leg that holds all the weight.
When asked who was the toughest player he ever faced, Milan legend Franco Baresi stated, “Maradona; when he was on form, there was almost no way of stopping him,” a view shared by his Milan teammate and fellow all-time great Paolo Maldini, who stated, “The best ever I played against was Maradona.”
Albeit Maradona has faced a lot of flak for his antics off the pitch, ranging from his cocaine abuse, improper handling of press conferences, or his political views, the fact of the matter is all that just doesn’t matter. All that matters is that the man was a genius on the pitch, with the ability to electrify the atmosphere the second he stepped onto the pitch.

He may not have looked it much but he drove terror into the hearts of his opponents. You’d think a man of his physical likeness would lumber about on the pitch, au contraire the man danced the tango with the ball, gliding and spinning around defenders, which such finesse and panache, just before he delivered the kiss of death, sending the ball packing into the goal!

There can never be another Diego Armando Maradona, which is probably why as a symbol of gratitude and in his honor Napoli officially retired the number 10 Jersey. 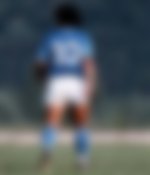