Maria Sharapova might have retired from tennis, but the game doesn’t leave you that easy, does it? The Russian tennis sensation was seen hitting some balls with a surprise partner on court.

“Thank you for having me @therivieracountryclub for a really fun afternoon. Reunited with this beautiful woman @hilaryswank.”

Thank you for having me @therivieracountryclub for a really fun afternoon. Reunited with this beautiful woman. @hilaryswank ✨✨

The post reads “reunited” as the two have been associated with each other in the past. In fact, the tennis dresses produced by Mission Statement, the luxury lifestyle brand of Hilary Swank, has been worn by Maria Sharapova.

Hilary’s association with tennis doesn’t end here. She had been engaged to tennis player Ruben Torres. However, the two called off their engagement in the year 2016 and Hilary got married in 2018.

Swank has won the Academy Award for her performances in Boys Don’t Cry and Million Dollar baby.

What was Maria Sharapova doing at the Riviera Country Club?

Sharapova was in Los Angeles for the Riviera Tennis Classic. This was the second edition of the event, with the first being organized in 2019. Last time, the event featured Andy Roddick, James Blake, Venus Williams and Maria Sharapova. 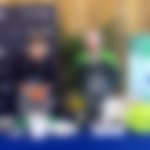 The event again featured an ensemble cast with guests like John McEnroe and Michael Chang at hand. In fact, current tennis player Amanda Anisimova was also a part of the amazing sports event.

More than the tennis, the event is known more for the punch of entertainment. Fans get to mingle with the tennis stars in casual settings. This time around, Sharapova was seen cooking pasta with the legend John McEnroe.

However, more than the McEnroe fun, she also participated in a player clinic to answer some questions. Maria Sharapova seems to be getting the most out of her post-retirement life. We wish her all the luck in her endeavours.