Published 12/18/2017, 1:54 PM EST
Ludhiana, December 18, 2017: Minerva Punjab FC continued their winning run in the Hero I-League after sneaking past Indian Arrows with a 1-0 victory. The match, which looked like a certain draw at one stage saw the Bhutan international Chencho take the match away in the dying moments from the valiant Indian Arrows with a brilliant solo effort.

Home side Minerva Punjab made two changes from their game against Chennai City FC with Souvik Das and Lago Bei making way for Amandeep Singh and center back Sukhdev Singh.

Indian Arrows made two changes in their squad from the last game as Aniket Jadhav who scored 2 goals in the opening game against Chennai City and central midfielder Abhijit Sarkar made way for attacking minded Rahim Ali and new comer Abhishek Halder respectively. 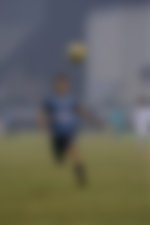 Minerva Punjab completely outplayed Indian Arrows in the first half of play. Captain Kassim Aidara had an early opportunity in the 3 minute to get his name in the scoresheet but his effort from 4 yards went wide off the target. On the 15 minute mark William’s powerful volley was somehow blocked by Indian Arrows defense line and almost looked like the action replay of his previous goal against Indian Arrows in Goa. Dano tried his luck with a superb volley in front of the goal but again Indian Arrows defender stood firm to block the shot. The best chance of first half fell to Dano in 35 minute when he hit the post from a picture perfect diving volley. Meanwhile Arrows Goalkeeper Dheeraj made two superb back to back saves in the 42 minute to keep his team in the match.

Indian Arrows somehow managed to keep the score line 0-0 at half time.

The 2 half was more even with Indian Arrows players started to get into the rhythm of the game. They had more of the ball but still couldn’t penetrate the strong Minerva Punjab defense. Indian Arrows had the chance of the match in 53 minute when Rahul came running down from the right wing going one on one with Minerva goalkeeper Rakshit who came out of his line and managed to put the ball out of danger with a heroic clearance. Minerva Punjab on the other hand capitalized their chance in the 80 minute when Chencho scored after sending two defenders wrong way inside their own box and hitting a powerful low drive into the right corner of the net giving no chance to Dheeraj. Minerva Punjab held up the game well since then and gave no chance to Indian Arrows to come back in the game.

The match ended at 1-0 in favour of home side Minerva Punjab FC who continued their winning run and main their top status in the Hero I-League with 13 points in 5 matches.