“Go! We Got a Game to Play”- Former Yankees Captain Derek Jeter Once Uncharacteristically Went Off on Reporter Backstage at 2014 All-Star Game

Derek Jeter once broke out of his polite character. It was during the 2014 MLB All-Star game. Not on the field, but rather in the dressing room. Jeter was dealing with the reporter, Joe Buck.

Derek Jeter is a retired baseball legend and an icon of the sport. Playing with the New York Yankees for his entire MLB career, Jeter is one of the greatest shortstops ever. He is a 14-time All-Star player and won five World Series trophies as a Yankee. While Joe Buck is a famous sports broadcaster covering MLB and NFL games.

Joe Buck was broadcasting the 2014 MLB All-Star game. He went into the American League pregame to introduce the players. Buck had some words of appreciation while introducing Jeter. However, Jeter’s reaction was not as kind as usual, and he shut Buck down.

Derek Jeter: Rather focused on the game

Joe Buck started off by announcing he has entered the American League clubhouse. First up was Miguel Cabrera. Buck introduced Cabrera as the ‘Triple Crown Wearer’. Cabrera stared in amusement. 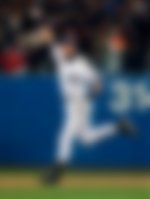 Moving on, Buck pointed towards Mike Trout, sitting with his back to the camera. Buck introduced Trout as ‘The Kid’ who is not even 23 but playing in his third All-Stars game. Also honoring Trout as one of the best to have ever played the game.

Never forget when Derek Jeter kicked Joe Buck out of the clubhouse at the 2014 All-Star Game 😂😂😂 pic.twitter.com/ioueXvENxi

Then, pointing towards the corner, Buck introduced Robinson Cano, Derek Jeter’s former teammate. Last up was the star attraction, Jeter himself. Buck started with, “You got the Captain, Derek Jeter. 14th in…. “

Jeter immediately cut off Buck, saying, “Let Go! We got a game to play.” But while waving Buck away, Jeter did have a smile on his face. So it’s unknown whether it was real or if the two were just jokingly playing scripted entertainment. But all of it surely was a hilarious scene.

The outcome of the game

The 2014 MLB All-Star game was the 85th All-Star edition in baseball history. The American Leaguers went on to beat the National Leaguers by a 5-3 margin. Notably, the last ever All-Star game in Jeter’s playing career. The Captain did get his due reward.

Do you think it was a serious reaction from Derek Jeter? Or was he just joking? Let us know your valuable thoughts in the comments below.