‘Ohtani Who?’- Baseball Fans Compare Albert Pujols With Babe Ruth and Shohei Ohtani After His Pitching Debut in Final Season

St. Louis Cardinals star Albert Pujols is all over the internet after his recent game against the San Francisco Giants. The Cardinals slugger is one of the best to grace the ballparks. No doubt about that. But in a recent MLB game, Pujols did something unexpected that shocked baseball fans around the globe.

Yes! To those who are yet to find out what did he do, Pujols made his pitching debut in the last year of his professional career. Regardless of his performance from the mound, the Cardinals legend registered his name in the history of Major League Baseball.

Notably, after the legendary Babe Ruth, Shohei Ohtani is the only player that has come close to his two-way playing style. But after his pitching debut, baseball fans were in awe to watch Pujols play from the mound.

Well, after watching Pujols pitch against the SF Giants, it will be a new debate in baseball. Not only the Cardinals fans but even the opposition fans were hyped to watch Pujols pitch for the first time. And why not? 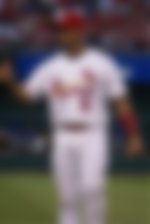 After a 22-year of an illustrious career in MLB, pitching was probably the only thing Pujols had not done. But not anymore. Taking to Twitter, fans showered their love to the Cardinals legend, and some even compared him with the legendary Babe Ruth and present two-way phenom Shohei Ohtani.

One MLB fan sarcastically tweeted that the only two-way player they know is Albert Pujols. While another fan declared him the winner of the Cy Young Award (An award given to pitchers).

OHTANI WHO!? THE ONLY TWO WAY PLAYER I KNOW IS ALBERT PUJOLS

Albert Pujols is MY Cy Young

Dan Buffa of Rotten Tomatoes noted Pujols as a rookie pitcher in his final season, while Sarah Langs shared some interesting data. She tweeted Pujols is the only second-oldest player to make his pitching debut after Lena Blackburne in 1929.

The Cardinals slugger also became only the second MLB player after Babe Ruth, who has 600-plus home runs and pitched in an MLB game. Per ESPN, Pujols pitched in his 2988th career game, which is by far the most game an MLB player has taken to throw his first pitch.

Players in MLB history who have hit 600 HR and pitched:

Albert Pujols made his first career pitching appearance in his 2,988th career game.

That is by far the most games in MLB history by a player at the time of their first pitching appearance. (2nd is Dave Concepcion 2,441) https://t.co/Kln1IAdXTw

Talking about the game, the St. Louis Cardinals defeated the Giants by 15-6 in consecutive games and clinched the series.

Given the kind of career Pujols has, do you think he will get his MLB Hall of Fame induction?