What’s in the Dugout?: A Look at the Top Five Iconic Lucky Charms Stored in MLB Team Clubhouses

Superstitions are a part of our everyday life. So the world of sports is no different. Baseball (MLB) is a sport that has forever believed in ‘Good Luck Charms’, curses, and omens.

Let us take a look at some of the MLB teams and the famous special accessories that are supposed to bring them fortunes :

The laundry cart tradition began for the Boston Red Sox in 2020. Every Red Sox batter who hits a home run is taken for a joyride on the cart, by his teammates. Infielder Christian Arroyo once stated that the cart was an idea originated by Kevin Plawecki.

The Baltimore Orioles keep a Home Run Chain in their dugout. The chain was originally owned by Mr. ‘Fired-up-guy’, who is a famous Orioles supporter. A popular presence at the Orioles games, he earlier used to sport the chain as a fashion accessory. He gained much public attention for the chain. Then one day, he handed over the chain to the Orioles’ first base coach, Anthony Sanders’ son, Logan. From there on, the chain entered the players’ dugout. The Home Runs count went up as well.

The story of The Chain ⬇️ pic.twitter.com/D7j2fWhVu8

Among the first recipients of the chain were Cedric Mullins, Ramon Urias, and Dylan Bundy. The first player to be honored with the chain was Mullins. He received it after smashing a home run against the Minnesota Twins. Then next in was Urias after he slammed a home run in the same game. As the season proceeded, Ryan Mountcastle, Jorge Mateo, Austin Hayes, etc. all got a share of the chain each. May the chain add a few more rings of victory.

The Home run Jacket tradition began for the Toronto Blue Jays on July 29, 2021. A jubilant Vladimir Guerrero Jr. made his way back into the dugout after blasting a mammoth home run. Guerrero Jr. got presented with a special jacket by his teammates.

That jacket honored home run scorers. The left cuff has the markings, ‘It’s a Tito Thing’. The saying is an ode to the team’s bilingual interpreter, Hector Lebron, whose nickname is ‘Tito’. They might have meant it in a rather humorous tone among the players and management group. While the right sleeve brightly flashes the words, ‘The Blue Jacket’.

We present to you…

In addition, the back of the jacket states, ‘La Gente Del Barrio’, which translates to the ‘People Of The Neighbourhood’. The names of the countries mentioned are an ode to the entire MLB team unit, from the players to the coaches and support staff. The jacket is the masterful creation of Hector LeBron to represent the multicultural background of the team and its fan community. Hopefully, their luck will be as colorful too.

The San Diego Padres’ lucky charm is a massive gold-plated chain with the initials ‘SD’ emblazoned on it. Its design concept is based on the ‘turnover chain’ that originated with the University Of Miami football team. The chain gets awarded to a defender who would intercept or else fumble recovery. Likewise, the Swag Chain, popularly known as the ‘Swagg Chain’, is out and around the neck of a home run hitter or the best performer during a victory. 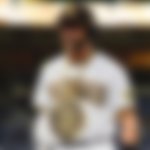 The chain got made by Gabriel Jacobs. He is the owner of Rafael & Co., a luxury jewelry store based out of New York. Jacobs collaborated with Manny Machado for the design. It was Machado who asked for the spinning SD feature. The necklace is thus an epitome of Machado’s leadership abilities. Jacobs created the bling chain with the hope of adding more fun to the game. May the chain keep spinning their fortunes for the better.

As the Kansas City Royals were struggling to win games in 2016, a praying mantis made its way into the Royals’ dugout. The mantis stood atop Billy Burns’ cap. The legend of Rally Mantis thus took birth.

The MLB team proceeded to win the game on that very day. The mantis changed fortunes for the Royals as the team continued their winning streak for a while. But then, the mantis soon died, and matters went south for the Royals. However, luckily enough, another mantis made its way into the Royals dugout. He got the fun name of Rally Mantis Jr. Moreover, he got a special home decorated with grass and bugs for food. So here is praying that more mantises keep making their way into the Royals dugout.