WATCH: When Mike Trout Channeled his Inner Spider-Man To Pull Off an Insane Save

They say Angels can fly. And Mike Trout of the LA Angels is out to prove us right. The center fielder while playing at Anaheim stadium pulled off one of the most outrageous efforts right on the wall and the internet is here for it. And while spider-mania grips the globe, Trout seems to have really outdone the acrobatic catches himself.

The center fielder was a 1st round pick by the Angels in 2009 and has been a key part of their roster since. And with the emergence of Shohei Ohtani, it seems to be clear that the Angels will look to make a push for the title soon. If they want to, then there’s going to be plenty more of the same required from Trout in their bid for a World Series Title.

Fans seemed excited at looking at the possibilities with Trout in centerfield. That’s nothing to say about them getting their superheroes confused though, one even calling him Superman.

Trout only managed 36 games in the 2021 season because of an calf injury that he had sustained in May of this year. But he seems fit and raring to go. Admittedly while he was frustrated last year with limited appearances, he should be ready and back for more in 2022.

Off-Season Moves for the LA Angels

The LA Angels are clearly after depth and rotation in who is going to be pitching from the mound for them, come 2022. As such they have signaled clear intent in the signing of Noah Syndergaard on a one year $ 21 Million dollar deal in November.  Considering the available budget, the Angels could go after strong first team contenders who are free agents this off season, including the likes of Robbie Ray, or even Kevin Gausman.

The Syndergaard deal really shouldn’t affect their pursuit for another top-tier player because their rotation will likely turn on one ace pitcher and another capable depth piece to deputize. Considering the presence of Shohei Ohtani in the roster, this could well mean that the season begins with the likely rotation of Shohei Ohtani, Syndergaard, Patrick Sandoval, and Jose Suarez. 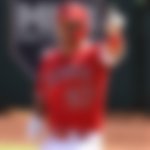 Mike Trout is a key presence in the dugout adding strength and stability in center field and the Angels will be looking to bank on him in 2022.