Anthony Pettis Sets His Sight on Becoming a PFL Champion

Anthony Pettis has climbed the mountain throughout his career.

From winning gold in both the WEC and UFC, to becoming the only fighter to grace the cover of Wheaties, “Showtime” has always been a marquee player in the sport.

Now, Pettis has his sights set on becoming a PFL champion and will begin that quest on April 23 at PFL 1 vs. Clay Collard. The two fighters are part of the lightweight regular season that will see a winner crowned.

For a veteran of the sport, the lay of the land in the PFL was what helped entice him to join the promotion.

“I like this format,” Pettis said. “I feel like if I went to other promotions, I would have had to go and fight my way up to a title shot and try to figure out what I had to trash-talk about to get into the next place in line.

“The stability of knowing when I’m gonna fight. I know my whole schedule right now. I know when I gotta make weight, I know when I’m going to be getting down to weight; I think that was what stood out to me.”

Unlike other promotions, the PFL holds a regular season format where fighters square off with one another. Things transition to a tournament after with the championship finale to take place, awarding the winner both the league title and $1 million.

Pettis, who turned 34 years old earlier this year, earned three “Fight Night” bonuses while competing in the WEC and eight more in the UFC including two “Fight of the Night” honors with Dustin Poirier and Tony Ferguson. 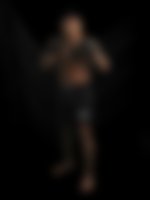 Overall, he is 24-10 in his career with 11 knockout wins and seven more via submission. Last year, Pettis scored decisions over both Alex Morono and Donald “Cowboy” Cerrone.

“I think it’s just another chapter in my career,” Pettis said. “I don’t feel really close to retirement age. I don’t feel like my body is giving up on me or my mindset; if anything, it’s getting stronger.

“Dealing with a sports psychologist has opened up my mind to that side of sports training. I’m excited to keep continuing that journey.”

PFL 1 takes place from the Ocean Casino Resort in Atlantic City and will air live on ESPN2 and ESPN+.