Conor McGregor is one of the finest fighters of his generation. While his antics away from the cage usually take some credit away, there is no doubt that he is an elite fighter. One doesn’t KO Jose Aldo in 13 seconds if they are not elite. But Conor did look weak in his UFC 229 fight against Khabib Nurmagomedov. Khabib rag dolled Conor for most of the fight, eventually making Conor tap out to a neck crank.

Conor oddly decided to share a clip from the fight where he kneed Khabib in the head from the bottom position. That isn’t a legal strike, but Conor has gone on Twitter to try to get people to accept the strike as a valid one. He called out Joe Rogan and Dana White in the same tweet.

This strike should not be illegal. Should actually be enshrined! Look at him cower his head after it and keep it tucked. Kept honest! Guy is latched onto my arm not letting go. Everything bar biting and gouging should be permitted here. Are we fighting or what are we doing here?

He marveled at his own ‘unconventional’ technique and made a case to legalize the shot. Joe Rogan on commentary pointed out that the strike was, in fact, illegal. His argument was that everything but biting and gouging should be allowed.

Sadly, there is a reason the UFC did away with that as their rule-set early in their tenure. That happened with the help of referee John McCarthy, who wrote the unified rules of MMA. Conor tried to get McCarthy’s take on this situation as well.

@JohnMcCarthyMMA what do you think Big John? Should this strike be legalized?
Your pal,
Mr. tasty shots

Conor McGregor and his odd request

This is another example of people having a hard time deciphering whether Conor is being serious. While in theory, a rule change like this would nullify some of the ground game that fighter use. However, this opens up a larger and more dangerous precedent which would allow knees to the head. 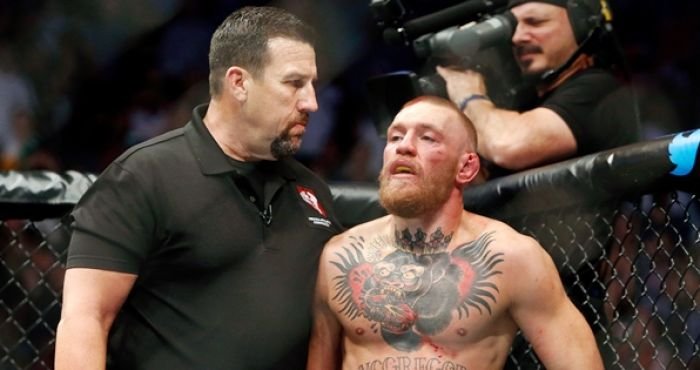 Even if the case is to only allow fighters to use those knees from the bottom position, it poses serious risk regardless. In a sport where both combatants anyway attack each other’s heads through their strikes, there is no need to allow knees to the head from any position.

It is unlikely that John McCarthy would reply to this tweet, because the premise is quite shaky. The clip also shows Conor curling his foot around the cage mesh to limit Khabib’s control of him. Evidently, this is coming from a position where he wouldn’t want to be in that situation again and have more outs.