Former UFC dual division champion and current analyst Daniel Cormier came under the scanner for attending a media event prior to UFC 264 while being drunk. Cormier, who is currently under a verbal spat over social media platforms with Conor McGregor, got tagged by the latter recently on the same.

Their social media war really started after Cormier criticized McGregor for speaking ill about Khabib’s late father, who passed away last year. Cormier also criticized the Irishman for his spiraling down career in his recent podcast.

After the backlash from Conor and his fans over the drinking accusation, Laura Sanko, a fellow UFC analyst, came to support the former UFC heavyweight. Sanko took to Twitter and wrote a post showing her admiration for ‘DC’.

I can assure everyone he wasn’t actually drunk. DC is a funny guy and he was having fun. He’s twice my size, we drank the same amount just as fast (well, almost lol) and I was fine. He was joking around. He’s a true professional on all levels. https://t.co/WXbVazrnN8

“I can assure everyone he wasn’t actually drunk,” Laura said. “DC is a funny guy, and he was having fun. He’s twice my size, we drank the same amount just as fast (well, almost lol) and I was fine. He was joking around. He’s a true professional on all levels.”

The Irishman, in a now-deleted tweet, criticized ‘DC’ for his remarks and added the drinking accusations. The former dual division champ had written, “It is a sackable offense for a commentator to be drunk at press work the day before commentating the big fight. Dreadful! Get it together. Belching in the mic at a press event and an all wtf. The day before commenting the big fight? Is this guy serious? Disgraceful.”

What Daniel Cormier had to say about Conor McGregor and his verbal assaults?

It’s not new that McGregor is targeting someone over the social media platforms. He has made a career out of getting under the skin of his rivals. He used to do this prior to his fights, and he is still doing this even though he is not fighting right now.

Cormier, though, doesn’t seem to be bothered by it. And even urged the Irishman to come with all he wants. “So McGregor, listen to me, bud. Stop worrying about me, don’t worry about Daniel Cormier,” Cormier said (to Steven Marrocco of MMA Fighting).” 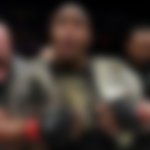 WATCH THIS STORY: 5 interesting facts about UFC you probably didn’t know about