Retribution Member Knocked Out on Raw

Khabib Nurmagomedov is arguably one of the biggest stars in the UFC right now. The Dagestani fighter saw his fame skyrocket after defeating ‘The Notorious’ at UFC 229. Since then he has become a major figure not only in MMA but all across the sporting world.

It’s well known that ‘The Eagle’s’ father Abdulmanap Nurmagomedov’s dream fight was to see his son take on Georges St-Pierre. This is a fight Nurmagomedov has openly stated that he wants next. However, he still has Justin Gaethje ahead of him, who will not be a push-over by any means.

Read: “Just Come to Wish You the Best of Luck”- When Georges St-Pierre Met Khabib Nurmagomedov

In an interview, TMZ sports asked Dana White if it was realistic to expect ‘GSP ‘to come out of retirement and fight Khabib who seems to be in the prime of his career right now.

White replied, “Question is, a guy like GSP who has been out for as long as he has and at his age, can he make that weight? Realistically if GSP makes that weight and if he beats Khabib, I mean, He’d be the only guy to win three titles.” 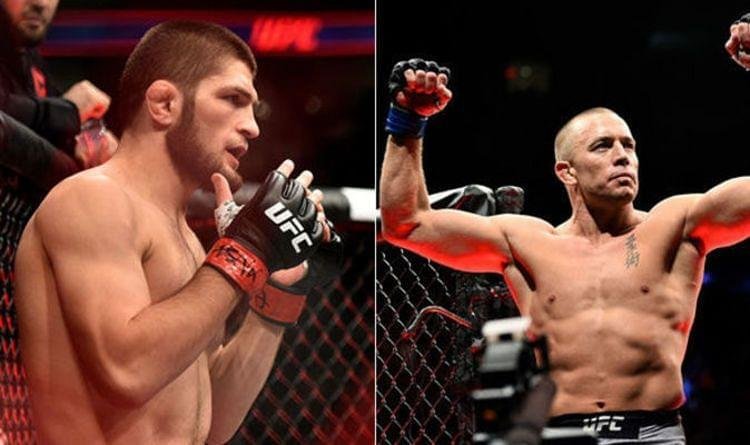 The UFC President continued, “Just because that’s what Khabib wants doesn’t mean that fight can be made. There is just so many things that have to come into play for that fight to happen”

St-Pierre last fought almost three years back at 185 pounds. Since then, the Canadian fighter has never hinted at a potential comeback. At 39,  ‘Rush’ does not have age on his side. If he were to fight Khabib, he would have to cut down to 155 pounds; 30 pounds lesser than the last time he made weight. This will be a tall task for someone who has been out of competition for 3 years.

The only fight — after Justin Gaethje at #UFC254 — that excites @TeamKhabib is Georges St-Pierre.

However, the UFC has built a reputation for making the best fight the best and putting on fights that the fans want to see. The fight between ‘GSP’ and ‘The Eagle’ ticks both boxes. Therefore, it will be interesting to see if the fight actually comes to fruition.

Do you think a fight between St-Pierre and Khabib will take place? If yes, at which weight class, will the two men compete?