UFC 254 is one of the most anticipated PPVs of the year. It has two big fights at the top of the card, with one of them being a Lightweight Championship fight. Interim Champion Justin Gaethje will be looking to unify the belts when he faces reigning champion Khabib Nurmagomedov. The co-main event is a de facto number one contender’s fight in the Middleweight division between Jared Cannonier and former champion Robert Whittaker.

Outside the main event – what fight are you most looking forward to? 🏆

Normally, any card with Khabib on the billing would sell out-especially in the Middle East, where Khabib is considered a hero. However, the pandemic has closed the doors on all live audiences. However, that may change for this card, as the Abu Dhabi Tourism Director, Saeed Rashed Al Saeed, revealed some great news.

“We are currently studying how to bring fans into UFC 254. Right now we’re going through how to segregate fans from people inside the bubble but still get them inside the space in the safe manner. If everything goes to plan we’ll be announcing this soon. It’s not confirmed yet but the plan is in place but it needs to be endorsed. I’m optimistic but health and safety cannot be compromised. That is our priority, it will not happen unless it is foolproof.”

The last major event with fans in attendance for the UFC came in February for UFC 248. The card was headlined by Israel Adesanya and Yoel Romero’s disappointing Middleweight title fight. However, that was the card that had the possible Fight of the Year between Joanna Jedrzejczyk and Weili Zhang. 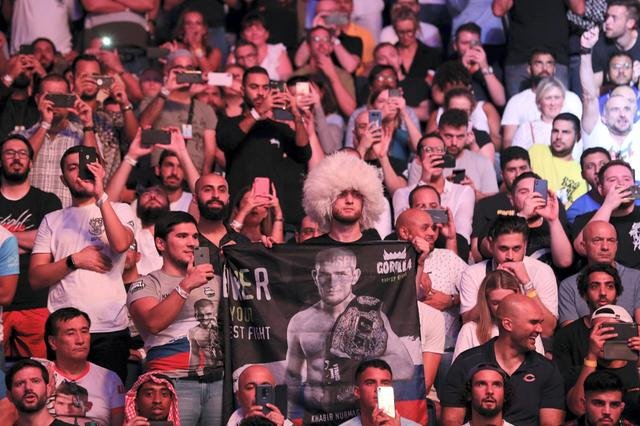 Khabib fighting in the Middle East would be the perfect way to kick off shows with crowds again. There will be obvious limitations, and we cannot expect the same packed stadiums from before. However, even a small audience that could add to the environment of the fight would be fantastic.

Even though it may happen for UFC 254, it probably won’t happen in any of the American UFC shows because the situation with the pandemic is still not safe. Nonetheless, this is a strong start and maybe becomes a fixture of all future Fight Island events.