Francis Ngannou is a name synonymous with destruction. ‘The Predator’ made quick work of Stipe Miocic to grab UFC heavyweight title at UFC 260.

He is an inspirational figure for all those who want to become like him. But there is another fighter, who, just like Ngannou, has been an inspiration to many, Mike Tyson. 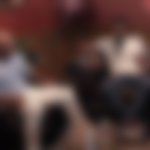 Recently, Ngannou met Tyson. He described how Tyson inspired him to become what he’s today. He said, “Growing up idolizing Mike Tyson. Watching him, he is like the greatest of all time for me. Even today, watching his videos over and over, his stories and everything.”

Ngannou feels Tyson had a great impact on his life and meeting him as UFC champion feels great. He further said how Tyson made it possible for him (Ngannou) to be like him.

‘The Predator’ further admitted that Tyson was funny, and it was crazy to see his mindset, which was quite unique. He concluded by saying that it was great hanging out with him and he got to learn so much from him.

What’s next for Francis Ngannou?

After his jaw-dropping performance against Miocic, Ngannou has become the top draw in UFC. Before this fight, UFC President Dana White had announced Jones would face the winner of the bout.

Ngannou is most likely to fight Jon Jones next, provided they (Jones and UFC) come to an agreement. ‘Bones’ has been vocal about pay issues and wants a hefty paycheck for his fight against ‘The Predator’.

Although Jones has long been dreaming about his jump to heavyweight, for which he had trained, a big payday is the only thing that could bring him back in the ring.

Another opponent who could face Ngannou is Derrick Lewis. His name came into the limelight after Dana White brought it up after UFC 260.

Lewis is one of the few fighters to have taken on The Predator and emerged triumphant. They faced each other at UFC 226 in 2018, where Lewis won in Round 3 by way of a unanimous decision.

Regardless of who battles it out against Ngannou, he will start as a favorite for the fight. A fight with Jones is like a once-in-a-lifetime moment. It all depends on how UFC puts it together. Who do you think will battle Ngannou for the belt?