Albert Park Begins its Preparation for the F1 Race, Signalling the Near End of the Winter Break

A livery can help a team stand out very well (even if their performances don’t), from the usual array of dull and boring colours all around. Ranging from the Ferrari Red over the years to Jordan’s variations like the 7UP design or the Bitten Hiss, Formula One has seen many, some crazy yet incredibly livery designs over the past. Essentially Sports brings to you 10 of the finest F1 livery designs:

Before Colin Chapman’s vision(that almost anything that could be sold could adorn a Formula 1 car), liveries were quite common, and unimpressive. Far were the times in which every country should have a racing color(the British Racing Green, as an example), but without big sponsors, teams tended to be conservative on their choices. So came Gold Leaf and later, the John Player Special – tobacco industry was the first that came in force. The combination of black and gold made for an unforgettable livery, made even more popular by those who drove for Lotus at the time. Emerson Fittipaldi and his 72 model came to stardom in 1972, and later came in Mario Andretti, Ronnie Peterson – then an interlude and the returning in the eighties, with Ayrton Senna(it is almost impossible to not remember his first win, in Portugal 1985).

Sadly a market decision determined that the brand should change, and although the strong yellow brought with Camel proved popular, it was no match to the one that preceded it. It caused such an impact that when Lotus returned in its new guise, in 2010, black and gold were again the chosen colors, to make a plaused tribute – and it was emotional and nice to see it again on the top spot of the podium with Kimi Räikkönen at Abu Dhabi in 2011.

Gone were the times in which Bruce McLaren decided the fate of the team he created. Teddy Meyer, who inherited the team’s helms knew that the old orange color scheme could not pay the expenses and make the squad fight against the likes of Lotus and Tyrrell.

Until 1973, the money brought by Peter Revson(Yardley) was enough, but after his departure to the Shadow team, other financing sources had to be found. In came Aleardo Buzzi, the man behind tobacco giant Phillip Morris and a deal was found to bring in Emerson Fittipaldi, who could be a real title contender, having won in 1972 with Lotus. From then on, and until 1995, white and red were the colors of the Woking squad, and it was no coincidence that Emerson started an era of wins and world crowns – James Hunt, Niki Lauda, Alain Prost and Ayrton Senna followed. Not even the selling to Ron Dennis and Mansour Ojjeh changed the partnership – it only made it more professional and strong.

As opposed to what happens now, there was no rush or need to change the livery; it was almost more of the same every new year. Not that it bothered any fan, as it became a classic.

Honda’s experience in Formula 1 is quite bittersweet, as it tasted glory supplying engines, but wasn’t as successful as a factory team. It’s last incarnation started on what was the BAR squad – one that tried to share the livery of its cars in two halves, completely different from each other, as it was not allowed to use different liveries at the same time. But the post is about Honda, and one of its liveries that was a direct consequence of the results below expectations on track.

Honda relied on not using the sponsorship’s colors for their car. Instead they relied on their concern for the environment, using the car. Thus came to picture Honda’s 2007 Championship contender, driven by Jenson Button and Rubens Barichello. The car led Honda to finish 8th in the Championship with 6 points in the season. To be perfectly honest, not many were big fans of the green earth f1 livery.

Here it is not just a case of the livery, but  liveries. The blood red livery of the Prancing Horse is iconic. As time passed, it really changed quite a lot.

First of all, “il Commendatore” Enzo Ferrari hated even thinking about a sponsor that was not techinique. Then, slowly he saw that it wasn’t enough to be competitive. Fiat (that became the parent company) and Marlboro joined but the Italian flag colors were still quite constant. Then came the Luca di Montezemolo years at the helm, who brought an array of new sponsors.

However, in 2016, Scuderia Ferrari decided to go retro, and the result was a stunning piece of machinery.

Ever since Eddie Jordan joined Formula 1, in 1991, one couldn’t expect something ordinary. Evidently, that included the team’s liveries. The squad had many unique liveries during its presence on the circus. Namely the 7UP green, the Sasol red and blue, the yellow of its last days. 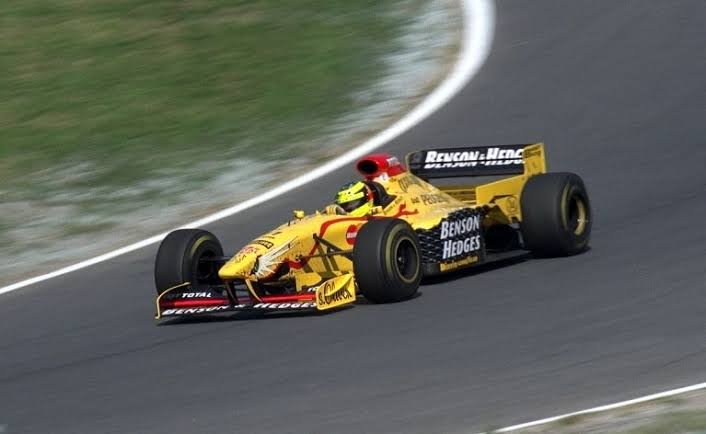 When sponsors were rare and not strong enough to impose their own colours, one in special marked the British team’s existence: the Benson & Hedges yellow/black combination that prevailed from 1996 to 2004. At the time, tobacco sponsorship was still a force to be reckoned with. The marketing team created a concept that became immensely popular. As it turned out, the car’s nose portrayed a snake face, with their venom teeth. That was followed by a bee with big and round red eyes and a shark with its jaws open.

Since many countries didn’t allow tobacco sponsors, they had to dodge those headaches. While rival Marlboro opted for an anonymous barcode, B & H chosen a more direct approach. Words like “Bitten & Hisses”, “Buzzin Hornets” and “Be on Edge” worked as a smart substitute and helped to make the livery more and more popular. 2001 even saw a shark-based f1 livery on the car. 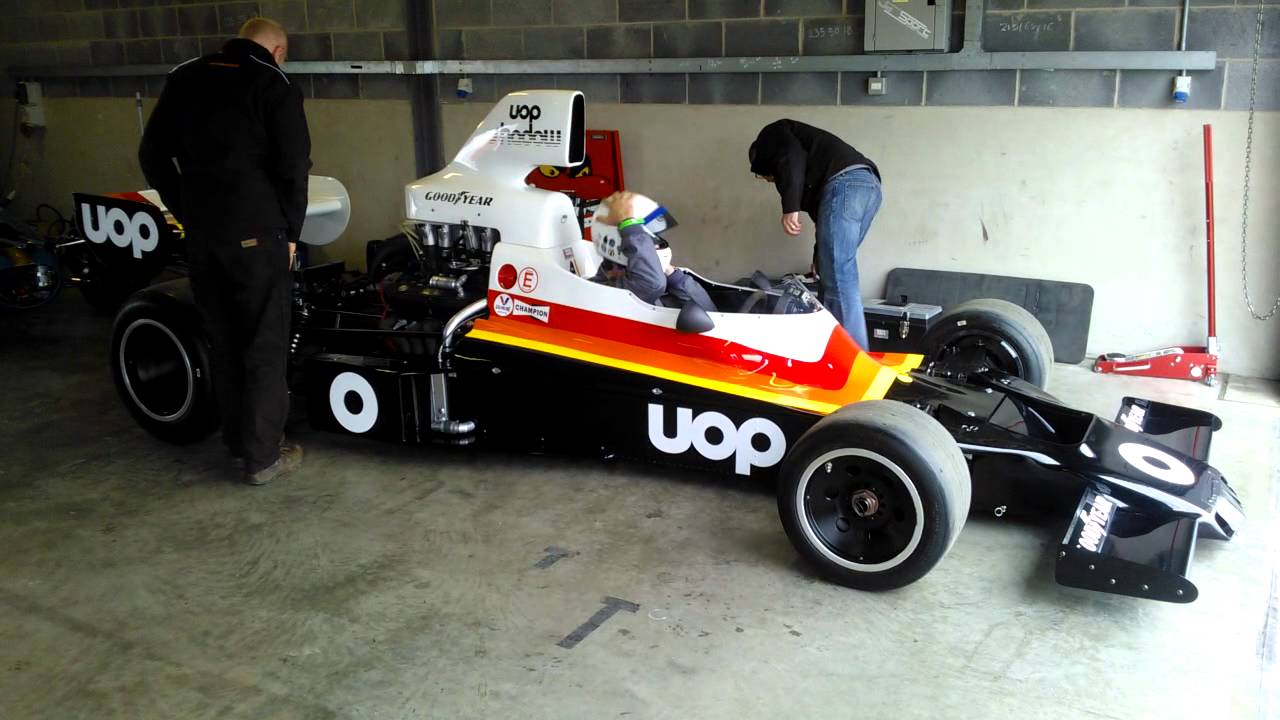 The Shadow team, by itself, was surrounded by attention and curiosity. It was the brainchild of a former CIA agent and World War II veteran Don Nichols. In the 1973 season, with a new partner in the form of Universal Oil Products (UOP), he entered Formula 1. Tony Southgate designed the first car, and the likes of, Alan Rees and Jo Ramirez were part of the squad.

Nichols and his DN1 made a lot of noise by keeping the livery already popular on Can-Am. It was a bright black with white logos and the american flag on the top of the air intake. Sadly, a lack of funs saw the black colour, give way to a much more subtle white. It was in that car that Alan Jones took Shadow’s only win (Austrian GP 1977). While not seen on an F1 livery anymore, the spy black scheme is still worshiped and alive on diecast models.

While Red Bull became a more serious effort over time, leaving behind the party-led and cool ambience to fight for titles and wins, Toro Rosso as the “younger brother”, whose mission was to nurture and prepare young talent to the top, always had more freedom to work and that involved the F1 livery design.

In 2017, the sister team opted for a radical livery. Rather than remain as a Red Bull clone with visual differences, Toro Rosso revamped their paint job.

It would be hard not to include any of the Frank Williams’ creations on this list. Although some choices could be counted, one, specially, comes to mind. In 1985,  the Grove team chose a very elegant combination of blue, white and yellow that integrated quite well.

The car’s history and racing performance justified Enzo Ferrari’s famous saying, “a beautiful car is the one that wins races“. In 1986, Nelson Piquet and Nigel Mansell went to the title fight until the very last race, only to have it stolen by Alain Prost, due to tyre problems in Australia. A year later, however, the Brazilian didn’t miss the occasion. Even though Honda decided to join rival McLaren in 1988, their colors remained the same until 1993. Soon, Renault came on board, tasting glory in 1992, with Nigel Mansell, and in 1993, with Alain Prost. 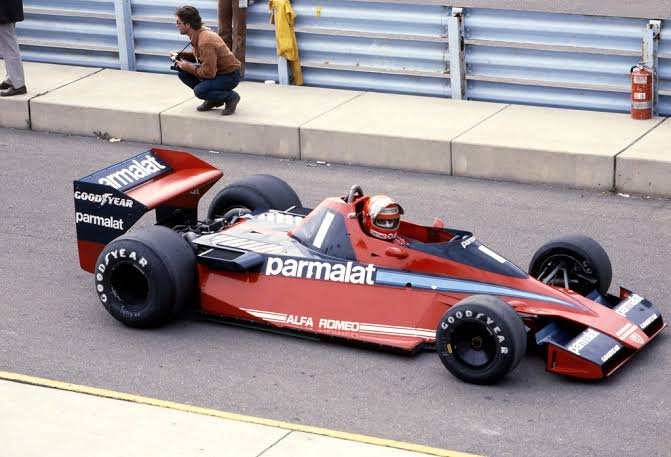 The Brabham BT48 was a Formula One racing car designed by Gordon Murray and raced by the Brabham team. The car, powered by a 12-cylinder Alfa Romeo engine, competed in the 1979 Formula One season. The intended plan was to run the BT47 but the FIA outlawed it. This was because it had a Chaparral 2J-type box rear end with twin variable geometry fans on the rear. The fans’ objective was to maximize ground effect, so Murray designed the BT48 instead. 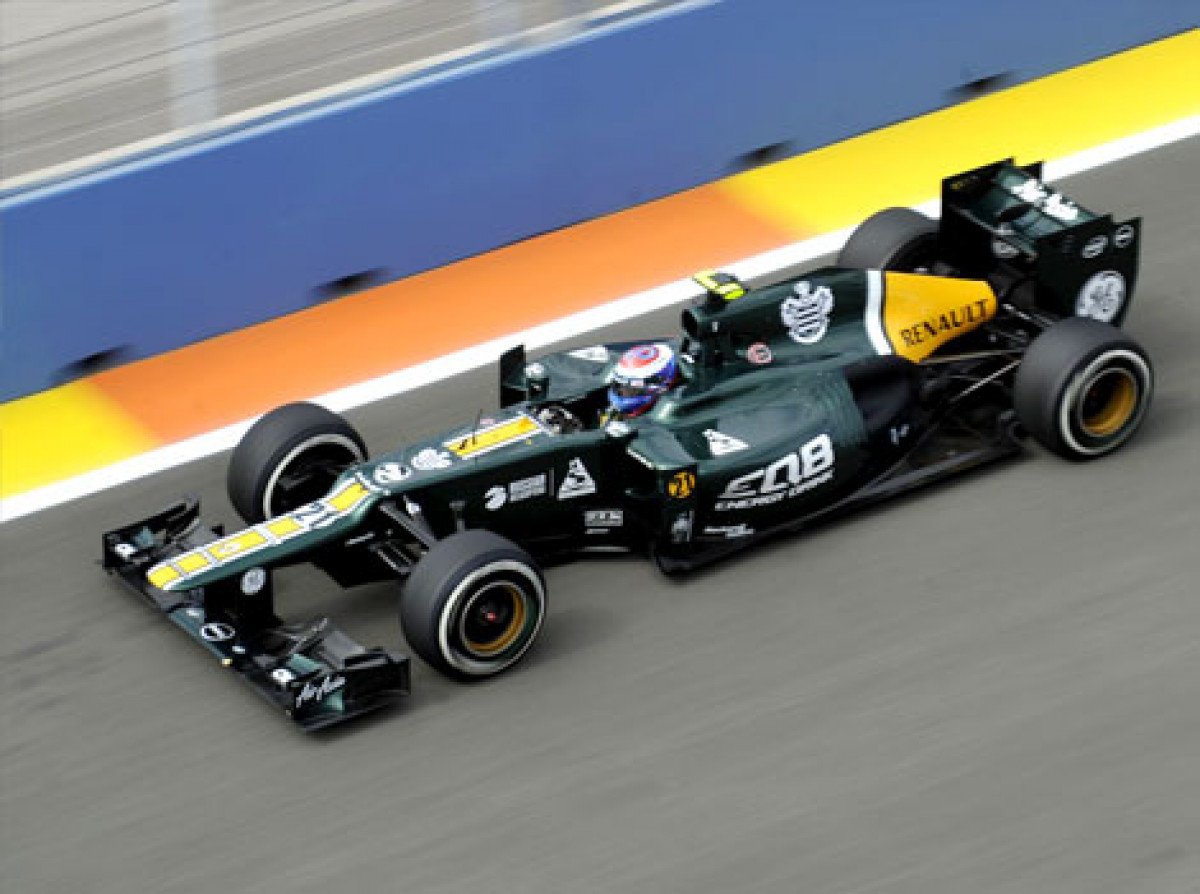 The Caterham F1 Team was an Anglo-Malaysian Formula One team based in the United Kingdom. The team’s F1 tenure lasted from the 2012 to 2014, after Malaysian businessman Tony Fernandes acquired it. .

Admittedly, the 2012 livery largely resembled the iconic green and yellow colour scheme of the company’s road cars. This is why it is regarded as one of the most stunning F1 liveries