In Moto2, Enea Bastianini lost control of his bike and crashed. Honestly speaking, this was a fairly standard crash, but the danger was that the bike was lying in the middle of the track. Most riders took avoiding action, but an unsighted Hafizh Syahrin failed to spot the fallen bike and T-boned it. A few other riders were caught in the melee, but suffered minor injuries.

In MotoGP though, Franco Morbidelli collided with Johann Zarco at almost 200mph while heading into Turn 2. Apparently, the Avintia Ducati rider moved a little off the racing line while braking and slammed into the Yamaha. 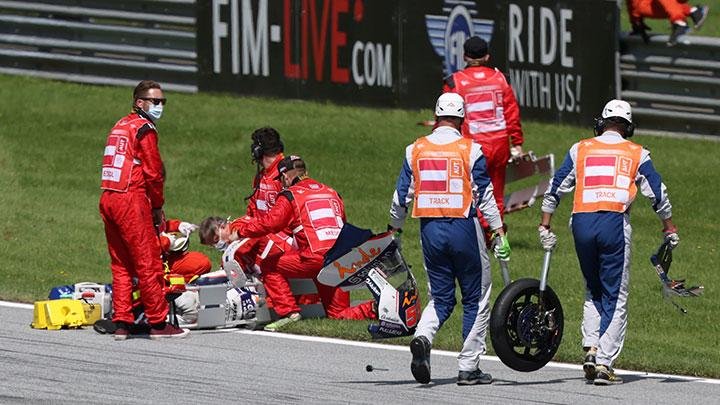 Both bike careened into the gravel at high speed, and narrowly missed wiping out Valentino Rossi and Maverick Vinales.  In fact, the factory Yamaha duo were millimetres away from getting hit by both flying bikes.

MotoGP is not taking any chances after Simoncelli, Tomizawa and Salom

With the riders back in Austria for the Styrian Grand Prix, MotoGP is amping up the safety. The sport decided to extend the air fence at Turn 3 to block the entire corner and avoid a potential repeat of last Sunday’s terrifying accident.

However, some riders like LCR’s Cal Crutchlow, were a little hesitant to put that idea into practice. Meanwhile, Morbidelli and Zarco will meet with Race Direction to discuss the accident in order to avoid something similar.

Zarco came off worse in the accident and underwent surgery to correct a broken right scaphoid. Truthfully, MotoGP wants to avoid the risk of a fatality on its hands. Until 2010, no rider had died since Daijiro Kato in 2003.

F1 Throwback: When Mercedes Took a Cheeky Dig at Red Bull in Its Backyard