Saturday’s NASCAR ARCA Menards Series race has been postponed to Sunday due to inclement weather after a rained-out day at the Toledo Speedway.

Despite a lot of efforts to dry the track, the track remained wet, and it was not safe for the drivers to compete. Consequently, the race was pushed to Sunday.

It is the second race of a doubleheader weekend at Toledo Speedway.

“[UPDATE] Today’s Menards 200 presented by Crosley Brands has been postponed until Sunday. Race is scheduled for noon,” ARCA Menards Series posted on Twitter.

[UPDATE] Today's Menards 200 presented by Crosley Brands has been postponed until Sunday.

This followed constant tweets and updates throughout, showing how bad the weather was and the efforts undertaken to get things going.

Earlier, the ARCA page tweeted a video of vehicles taking rounds on the track with equipment to dry the track for the race.
To this, racer Sam Mayer replied, “These guys have over 200 laps today I bet.”

The 17-year-old Mayer on Friday won the first race of the doubleheader weekend. It was his first career race win in the ARCA Menards Series.

Earlier on Friday, he had registered the best lap in practice. He had qualified in fifth place for the race.

Driving in his Chevrolet car, Mayer grabbed the lead just after the halfway mark in the race and held on after that for a win in the Menards.com 200 presented by SPxE race. 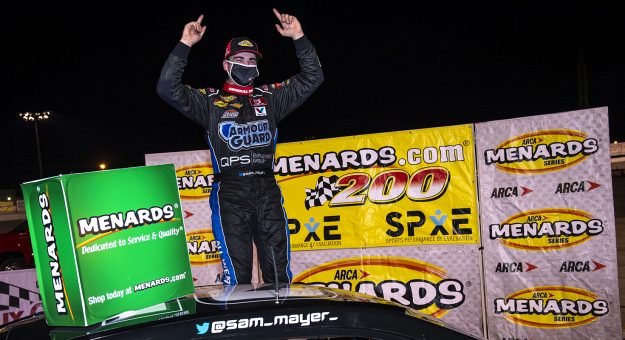 He held off a stiff challenge from rival Ty Gibbs in the closing stages of the race to earn a milestone win.

He turned the tables on Gibbs this time around after Gibbs had pipped him back in June at the same venue in a Menards Series East race.

15-year-old Taylor Gray finished in third, ahead of Bret Holmes, who was the winner at Kansas Speedway last weekend.

Michael Self completed the top five for the race.

Ty Gibbs to start in pole for Sunday’s ARCA race

Gibbs will start in pole position for the second race on Sunday.