“James Harden’s Been Doing This”: NBA Analyst Not Happy About Luka Doncic Praise

He was in trouble at the very beginning of the race but came back strong to finish in 12th place.

Jeremy Clements, who is one position outside the playoff spots, had an unfortunate incident that furthered Brandon Brown’s cause.

Clements was involved in a crash and finished in 29th place. Brown extended his lead over Clements in the Xfinity Series playoff race to 53 points.

Earlier in the race, Brown was forced to be pushed back to the pit road due to a mechanical issue. He fell by a lap in the process. He then quickly got his lap back once his pit crew fixed the problem.

Brown then scored four stage points in the second stage and finished 12th. This marks his second-best career finish on a road course.

The playoff race will only gather more heat now, with eight races to go ahead of the playoffs on September 26.
Myatt Snider, at 14th place, is 20 points behind Clements and 73 behind Brown.

Josh Williams and Jesse Little sit on 15th and 16th respectively, with their chances to make the playoffs looking very bleak.

The championship standings are led by Chase Briscoe, who has notched up five race wins and already has 28 playoff points. Behind him is Austin Cindric, who won last weekend’s race at Road America, with four wins and 27 playoff points. 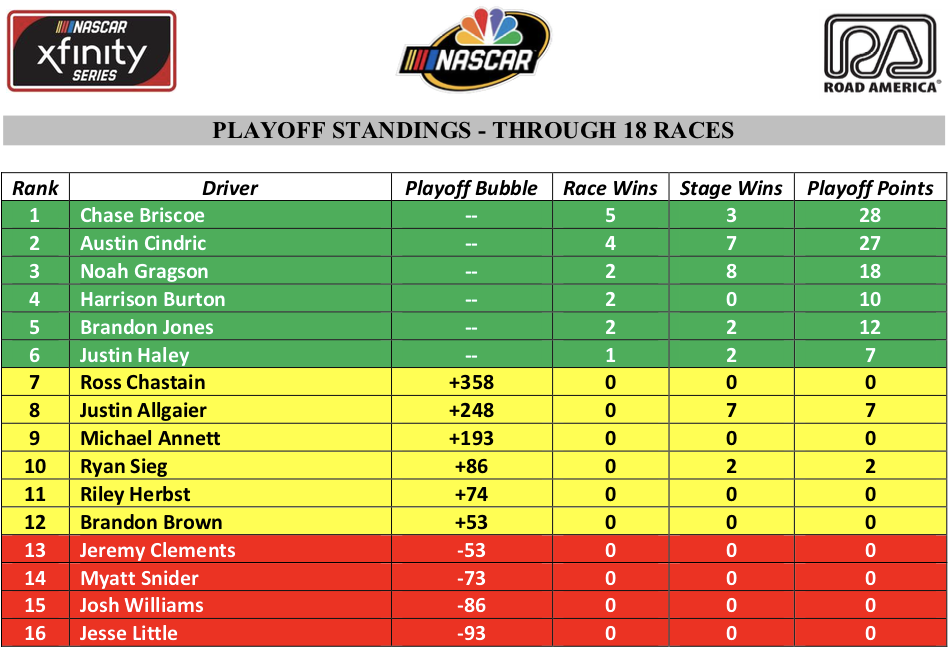 Noah Gragson, Harrison Burton, and Brandon Jones round up the Top-5 in the standings. The three drivers have two race wins each so far this season. Justin Haley rounds up the Top-6 with one win this season.

All six drivers have already secured their places in the playoffs.

Ross Chastain is 358 points clear in the playoff bubble with Justin Allgaier behind him. Michael Annett, Ryan Sieg, Riley Herbst, and Brown round off the Top-12.

ALSO READ- Can Jimmie Johnson Still Make It to the NASCAR Playoffs?