Dale Earnhardt Jr. began his top-flight NASCAR racing career in 1999. He went on to win his first-ever Winston Cup the very next year, in 2000 at Texas Motor Speedway.

His father and other team members greeted Earnhardt Jr. in the victory lap zone. He termed the victory as a very special one for him.

Speaking to the reporter, he said, “I’m outta breath, I tell you what, that was the hardest race I have ever done.”

“The guys worked really hard, Budweiser, Chevrolet, and everybody, and this kid, he worked hard.”

Earnhardt Jr. went past Jeff Burton to register his first win in his 12th Cup Series start. He finished up winning twice in his debut season, with a win at Richmond Raceway later in the year.

He drove the #8 Chevrolet Monte Carlo for Dale Earnhardt, Inc. (DEI) for much of his early years in the NASCAR Cup Series. He then made a move to Hendrick Motorsports to drive the #88 in 2008.

Earnhardt Jr has had unprecedented success at Daytona International Speedway over the years, earning him the tag of “Pied Piper.” 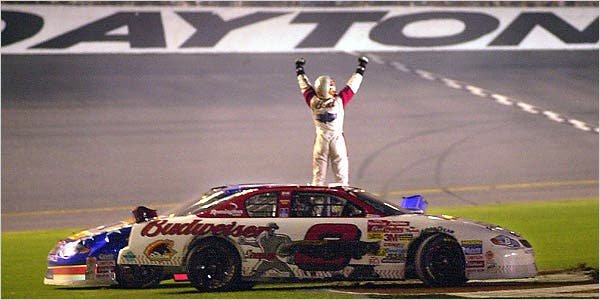 Earnhardt Jr. stayed with HMS until his retirement from full-time driving in the year 2017. The 46-year-old has amassed 26 wins in the Cup Series by the time, a tally that sees him tied for 30th position in NASCAR history.

He however hasn’t given up racing completely as he competes part-time in the NASCAR Xfinity Series driving the #8 Chevrolet Camaro for his team JR Motorsports.

WATCH: Dale Earnhardt Performs Emergency Maintenance in the Middle of a Race

“We Were Not Rule Breakers, We Were Rule Makers” – Darrell Waltrip on his Infamous ‘Creative’ Incidents in NASCAR