WATCH: When Robby Gordon Got Out of His Car and Hurled His Helmet at Michael Waltrip

Published 08/01/2020, 6:27 AM EDT
NASCAR has witnessed many memorable moments, be it victories, racing incidents, or players having a go at each other on the radio. One such moment that was talked about for a long time, took place between two famous drivers, Robby Gordon and Michael Waltrip.

Gordon and Waltrip did not have very notable careers, however, they made headlines with a heated moment between them. The said incident occurred during the Sylvania 300 at New Hampshire in September 2005.

How the heated incident occurred between Gordon and Waltrip

It all started when Waltrip came off a turn and rear-ended Gordon. The contact was hard and ended up sending Gordon into the wall.
Waltrip drove the following lap under caution, but Gordon made an attempt to back his car into that of Waltrip’s. He ended up missing.
A fuming Robby Gordon then got out of his car and did not care about other cars approaching him, whatsoever. He had his eyes only on Waltrip as a couple of other cars missed him, moving away just in time.
Gordon waited for Waltrip, held his helmet firmly, and aimed hard at Waltrip, hitting the car’s door. 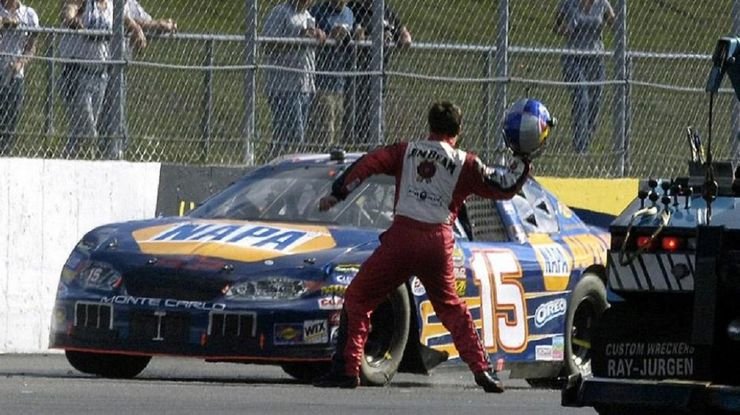 He then mouthed a few words in anger to a shocked Waltrip, before walking towards the ambulance.
Waltrip was stunned and said on the team radio, “Well, that was just rude. It was his fault.”
FOX Sports recently posted a clip of the infamous incident on their NASCAR Twitter page, reminding fans of it.

War of words between Robby Gordon and Michael Waltrip

Speaking after the race, Gordon showed his utter displeasure at the incident and towards Waltrip.
“You know Michael, everyone thinks Michael is this good guy. He’s not the good guy like he acts he is. The caution was out and he wrecked me and he’s a piece of sh**,” said Gordon.

The two drivers were called to meet with NASCAR officials after the race.
Gordon was fined a huge amount of $50,000 and was also penalized 50 drivers’ points for the helmet throwing incident. Waltrip was also penalized, but he successfully appealed the penalties.
Gordon and Waltrip later decided to make this incident a happy memory. They auctioned the helmet for a relief fund.

More from EssentiallySports on NASCAR