Michael Jordan enjoyed a mix of everything in his career. Early success, record-breaking commercial deals, off-court controversies, early retirement, comeback wins, and now a successful documentary too. Still, there are parts of his personal life that are the least discussed.

Take, for example, his first wife and all that went into their divorce. It was touted as one of the most expensive divorce settlements that the NBA had witnessed back in the days.

Where is Michael Jordan’s ex-wife and who is Juanita Jordan married to now? 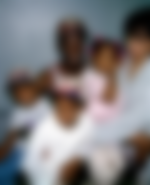 A young Jordan met his future first wife in 1984 when he was still in his rookie year. They met at a Chicago Bennigan’s restaurant. After that initial meeting, the two kept crossing paths at parties and soon began dating.

It was in 1988 when Juanita gave birth to Jeffrey, the first of their three kids together. Interestingly, since the child took birth 10 months before the marriage, Juanita resorted to legal help to ensure MJ accepts the kid.

They finally married in 1989 and their marriage survived through everything happening in MJ’s life for 17 years. But it was in 2002 that things went south. Juanita filed for divorce that year for unknown reasons. Later, amidst unproved allegations of infidelity on MJ, the couple mutually and respectfully parted ways in 2006.

Today, Juanita is a proud single mother of her three kids. She keeps a very low profile, away from media and the limelight, living in a suburban mansion.

How much is Michael Jordan’s ex-wife worth?

In the high-profile divorce settlement, the then 47-YO reportedly received a whopping $168 million in alimony payment. Not just this. ‘Air Jordan’ also paid another $2.1 million in legal fees to complete the legalities. No other NBA player had ever been part of one such expensive divorce settlement.

Also notably, The Last Dance documentary on MJ did not mention Juanita anywhere. Fans and critics saw this as something surprising because Juanita was an integral part of MJ’s life back then. The docuseries noted many personal details and controversies around MJ, but nothing at all about his love relationships.

The 6-time NBA Champion then married again after 7 years of gap. In 2013, he tied the knot with Yvette Prieto, with whom the legend has beautiful twin daughters, Victoria and Ysabel. The couple is going very strong and there’s absolutely no news of any issues between the two.

Now, if they release another season of MJ’s documentary, the fans hope to learn more about his private life.

Read also – Michael Jordan’s Kids: Who are They and What are They Doing Today?