Shaquille O’Neal and Kobe Bryant are one of the best duos in the history of the NBA. They helped the Lakers with a three-peat from 2000 to 2002. During their time together as teammates, they had their flare-ups as well. And it is quite usual in a team setup where two NBA superstars have to co-exist.

But they had patched up their friendship and remained very close friends until the sad demise of Kobe Bryant.

In the recent episode ‘The Big AMA’ from ‘The Big Podcast with SHAQ’, Nischelle asked Shaq who was his favorite teammate. And O’Neal said “Dennis Scott.”

A puzzled Nischelle asked for the reason. And Shaq said, “Because he taught me how to be an NBA man. Like, he taught me the ins and outs of being an NBA man and the dos and don’ts. Taught me everything I need to know.”

Shaquille reiterated that he calls him ‘Big Daddy’ because he taught him everything. The fans who were expecting Shaq to say Kobe as his favorite player must have been disappointed.

When asked who his worst teammate was, Shaq said that it was Dennis Rodman. He said that Rodman was a great player, but he made it hard for others. The Big Diesel said that the coaches would let him do whatever he wanted.

He said that when others were asked to come an hour before a game, Dennis would only show up 15 minutes before. Shaq also revealed that when the coach was talking to the team before the game, Rodman would be taking a shower.

But Shaquille O’Neal admitted that Dennis would still have a great game with 15 points and 20 rebounds.

Who is Dennis Scott?

Dennis Scott played in the NBA for 9 years. He played for Georgia Tech from 1987 to 1990. He was the ACC Men’s Basketball Player of the Year in 1990. Then the Orlando Magic selected Dennis Scott as the third pick in the 1990 NBA draft. 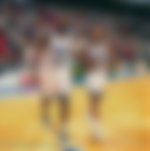 The Magic then drafted in Shaquille O’Neal in 1992 and like Shaq said Dennis must have helped him to settle in the NBA. As a young guy coming to the NBA from school or college, one would need some guidance until they find their feet. And it looks like Dennis helped Shaq who is very grateful.

WATCH THIS STORY – Johnny Depps net worth compared with NBA Stars Stephen Curry and LeBron James: Is he richer than the NBA World?

And Scott played for the Magic till 1997, and Shaq had moved to the Lakers the previous year.