The Portland Trail Blazers played magnificently against the Golden State Warriors and emerged victorious, finishing 123-98. They had a huge head start in the first few minutes of the first quarter itself.

While they celebrate their win against a team that is considered one of the most dominant in the league, they have another reason to celebrate owing to their power forward, Carmelo Anthony.

So far, the Blazers are 3-2. They showcased one of their best performances in the battle against the reigning champions, handing the Los Angeles Lakers a 115-107 loss.

However, it’s been an uphill battle from there. We have seen Carmelo Anthony struggle on the court, but it hasn’t stopped the veteran from breaking records.

After a lot of speculation about where Melo will go after his one year of free agency, he settled down with the Portland Trail Blazers.

The Blazers were looking for a spark and they found it in him. He became an integral cog as their third scoring option behind Damian Lillard and CJ McCollum.

In August last year, he surpassed Paul Pierce in All-Time scoring. However, with the new season kicking off, Melo has already surpassed Tim Duncan in All-Time Scoring in the regular season with 26,498 points and earning P14 on the list.

Leaving an elite scorer like Duncan behind is a huge honor in itself. In fact, even Lakers’ superstar LeBron James congratulated Melo on the achievement on his Instagram handle. 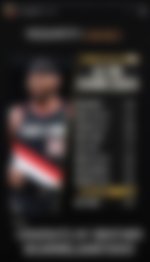 What does the Blazers’ star have to say?

After ending the game against the Warriors with a win, Melo was asked about how he felt regarding this new milestone. “I am just happy to continue to do what I do, be out here, and still do it at this stage in my career, at this age,” he stated.

“I am still enjoying the game and having fun with the game. To surpass Tim Duncan who, we all know how great of a player he was and what he did for the game… you know, I’m still goin’!”

"To surpass Tim Duncan who, we all know how great of a player he was and what he did for the game… you know, I'm still goin'!"@brookeolzendam gets an update on making history and the CarMerlots from @carmeloanthony in tonight's @Biofreeze Top Performance Review pic.twitter.com/35u9LJudFk

No matter what people say about Melo’s inefficiency, he constantly proves those critiques wrong. Although Melo isn’t looking like his best self, there are still many games for him to find his form.