NBA Rumors: Should Lakers Go All Out to Bring Back Lonzo Ball in the Upcoming 2021 Free Agency?

It’s once again time to go to work for Rob Pelinka and the Lakers front office, as they aim to salvage their first-round exit from last season. Although the Lakers ran out of gas against Phoenix owing to injuries to their superstars, gaps in the roster left them short-handed especially from beyond the arc. And therefore, with free agency coming up in the next 2 weeks, Pelinka now faces some tough conversations.

Laker Nation, come trade season will hope that the management is once again able to pull off a deal like the one which saw Davis come to L.A. Will the league see a superstar guard like Damian Lillard or Bradley Beal don the Purple and Gold next season? Seems unlikely!

But, what looks more promising for L.A. are the increasing volume of reports which point toward mutual interest over a LakeShow reunion with former Laker draft pick, Lonzo Ball.

Is a Lakers reunion on the cards for Lonzo?

Ball, who enters restricted free agency this off-season will be looking for a payday, especially coming of a career season in New Orleans, averaging 14.6ppg/4.8rpg/5.7apg. Zo’s shooting percentages currently at 41.4% from the field and 37.8% from beyond the arc have also shown his development, since his departure from L.A. Furthermore, Ball also addresses the Lakers‘ shooting and playmaking woes, an area which proved to be their Achilles heel without LeBron and Anthony Davis.

It appears the #Lakers will attempt to reunite with Lonzo Ball this summer.https://t.co/hByNfTBmnV pic.twitter.com/VEgCcpEVjK

Based on multiple reports regarding the Pelicans’ lack of interest in re-signing Lonzo, New York Times writer Marc Stein commented – “Expect to eventually hear of them searching for potential pathways, however, obstacle-strewn they would be, to reacquiring restricted free agent-to-be Lonzo Ball for that reason.”

While orchestrating a reunion between Ball and the LakeShow would make for a classic homecoming story, the Lakers’ cap-space troubles have limited their options yet again. But in terms of the fit, given his relationship with LeBron, and the body of work he puts in towards bettering his game, Ball may be an ideal pick up this season.

The key to gauging the possibility of a reunion lies in the detail of a potential deal. The Lakers in fact, face 3 major roadblocks in orchestrating this deal, especially since –

Lonzo is a wanted man this season. If New Orleans cuts him loose, multiple teams including the Clippers and Bulls have also expressed interest in signing him. 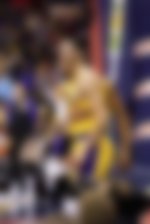 Thus, will the sentimental motive of a Laker return, or fast-tracking championship aspirations see Ball take a haircut in salary? Especially since the Clippers and Bulls can acquire him for rather lucrative deals.

Dennis Schroder, the Lakers’ current point guard also is a free agent, as he asks for a 4-yr 120-million $ deal extension. Will Rob Pelinka back a roster piece like Dennis Schroder with that high of an asking price? or will Schroder’s abject failure in the post-season when it mattered most deter the GM’s decision?

L.A’s front office is in for a roller coaster ride for the upcoming off-season. With over 10 players set to enter free agency, Pelinka has some work to do, as he once again attempts to put together another championship roster on the fly.