Undoubtedly one of the greatest to ever play in the league, Shaquille O’Neal was one of the most dominant forces the NBA has seen. He formed a brilliant partnership with Kobe Bryant and went on to win 3 NBA titles with the franchise.

Although he might be remembered for his time with the Lakers, Shaq left his mark on the Miami Heat as well. He joined the Heat from Lakers in 2004 and won his 4th title with a young Dwyane Wade.

Talking about his upcoming 50th birthday during a Miami Heat game, O’Neal talked about the Heat culture and how Udonis Haslem is making sure it passes on. 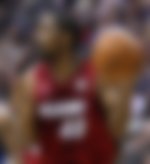 Miami Heat took on the Philadelphia 76ers when a very special guest appeared courtside. Talking to Will Manso, Shaquille O’Neal talked about his upcoming 50th birthday. When asked about the Heat and their performances, Shaq had a lot of praise for Udonis Haslem.

Udonis Haslem signed a one-year contract with the Miami Heat last year. That makes it his 19th year in the franchise and he remains their longest-serving player.

Playing in his 19th season for the Heat, the franchise holds a special role in Haslem’s life. Despite playing only one game last season, he has played an important role within the team.

Young players like Bam Adebayo have had the opportunity to be mentored by a player like Udonis Haslem. He has won 3 NBA championships with the Miami Heat in 2006, 2012, and 2013. Haslem is also the Heat’s all-time leader in rebounds.

“Mister Miami is back! Yes! Udonis Haslem has agreed to come back and play the game he loves so much.” The Miami president revealed his re-signing via a press release by the franchise.

Udonis Haslem will return to the Miami Heat on a one-year, $2.6M deal for his 19th NBA season with the franchise, source tells @TheAthletic @Stadium.

How has he been this season?

The 41-year old has averaged 3.0 points, 2.1 rebounds, and 0.3 assists this season. Despite playing only a handful of games this season, the veteran has held his own. He has been decent considering his age and the number of minutes he gets to play.

What is your favorite memory of Shaquille O’Neal in a Miami Heat jersey? Let us know in the comments below.

Abhinava is an NBA writer for EssentiallySports. He is currently pursuing his Bachelor's in Journalism and Mass Communication. Abhinava has been following NBA for the past 6 years and is a huge fan of the Golden State Warriors and Stephen Curry.
ARTICLES BY AUTHOR