NBA’s Christmas Day brought upon exciting levels of action on the court. The holiday also saw the return of an iconic pair of sneakers debuted by Kobe Bryant 10 years ago. Nike sent fans into jubilation by releasing the Nike Kobe 6 Proto ‘Grinch’ on Christmas Eve.

The sneakers officially launched on September 24th, but a few celebrities and athletes got their hands on them before they hit the racks.

Vanessa Bryant ensured fans got their chance at buying Kobe’s legendary sneakers and she has been gifting it to her well-wishers too!

There are several iconic sneakers in the Kobe Bryant collection, and the holiday-themed ‘Grinch’ editions are one of the most coveted designs ever created by Nike. The Grinch was a fan favorite and sold out in a jiffy when it first hit the market in 2010.

Likewise, it has been receiving a similar response after its re-release and Vanessa Bryant ensured that Kobe’s good friends got their gifts too! Vanessa sent Pau Gasol and his entire family a pair of Kobe 6 Proto ‘Grinch’ colorways for Christmas.

Gasol expressed his gratitude on social media by posting a heartwarming picture of his kids wearing Kobe’s signatures at the fireplace. The Christmas post assured Gasol’s love and support for Vanessa and her kids.

Vanessa got Pau and his family the Grinch Kobe's 😍💜💛💚 pic.twitter.com/GPy2S78RvQ

Besides Gasol, Vanessa also gifted a pair of Kobe’s to model Gigi Hadid, who posted a story with the stunning colorway on Instagram. 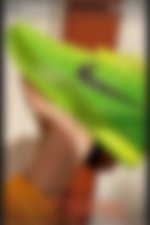 Anthony Davis ranks the ‘Grinch’ as the best Christmas shoe ever

Anthony Davis has donned several memorable Kobe signature sneakers. The ‘Brow’ has often expressed his admiration for Kobe, and even AD showed off his pre-Christmas gift that he received from Nike.

Moreover, AD rocked them during the Lakers’ Christmas Day game against the Dallas Mavericks, exactly 10 years after Kobe debuted them. The 27-year-old made a statement after the game and said:

“[The best] Christmas shoe is definitely the Grinches. I don’t think no one can argue that.”

Plenty of fans would agree with Davis on his statements as the Grinches are truly one of the most iconic sneakers Kobe Bryant has ever worn on the court. One can also expect Nike to release other iconic colorways from Kobe’s collection in the future.