Joel Embiid sustained an ankle injury during a game against the Minnesota Timberwolves recently. The Philadelphia 76ers faced the Timberwolves on November 19, 2022, at the Wells Fargo Center. Fellow 76ers stars Tyrese Maxey and James Harden were already out due to each suffering from foot injuries. Fans are left worried about the possibility of Embiid having to remain on the sidelines for sometime as well.

It seems like the Philadelphia 76ers are a little too prone to injuries so far this season. At first, it was James Harden, then Tyrese Maxey, and now Joel Embiid. In the fourth quarter of the game, as Georges Niang went to take a shot, he collided with Karl-Anthony Towns and fell back on the ground. Immediately after, Embiid stumbled on Niang and fell over with a grunt. Embiid remained on the ground holding his left ankle, looking clearly in pain.

The 76ers’ game against the Minnesota Timberwolves didn’t end well for the Philadelphia side. The Timberwolves beat the 76ers 112-109. Nevertheless, Embiid played well, scoring 32 points, 9 rebounds, and 6 assists on the night. Additionally, Shake Milton scored 27 points with 6 rebounds and 2 assists.

Evidently, fans got worried in anticipation of another 76ers star going down. After the Saturday night game, the 76ers are now 8-8 for the season so far. If Embiid gets sidelined due to his apparent injury, the team might struggle to keep the record in their favor.

About two weeks ago, Philadelphia 76ers superstar James Harden suffered from a foot injury during a game against the Washington Wizards. Despite that, Harden finished the game with a bandage wrapped up around his foot. The 10x All-Star scored 24 points, 10 assists, and 5 rebounds. However, the 76ers announced afterward that Harden had a tendon strain and would be out for at least a month.

On November 18, yet another 76ers star suffered from an injury. During the game against the Milwaukee Bucks, Tyrese Maxey suffered a minor foot fracture. As a result, Maxey was also subsequently sidelined for about 2-3 weeks. 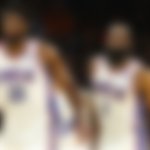 After Joel Embiid’s injury, 76ers fans are visibly worried about the team’s performance.

Here are some of the reactions from NBA Twitter:

The Philadelphia 76ers face the Brooklyn Nets next on November 22. As of now, there’s been no update on Embiid’s injury except for a tweet posted by a fan.

The picture showed Embiid seemingly fine as he walked out of the court without any assistance.

Watch This Story – Joel Embiid, Kevin Durant and other NBA players share their opinion about the new Wilson basketball

Do you think the Philadelphia 76ers would be able to manage without Embiid, harden, and Maxey? Let us know in the comments below.

Siyari Debbarma is an NBA writer for EssentiallySports. She is currently pursuing a degree in Civil Engineering from Abascus Institute of Engineering and Management. She previously interned at the Y-East Organization as a content writer.
ARTICLES BY AUTHOR