The Brooklyn Nets had an incredible summer on the free agency front bringing in Kevin Durant and Kyrie Irving. However, they’ve had little to show for it so far. Some of that was to be expected with Durant missing the entire season due to a torn Achilles tendon. Now, Irving’s injury problems have resurfaced. And unfortunately for him and the Nets, they don’t appear to be going away.

Kyrie Irving continues to struggle with the shoulder injury that caused him to miss 26 games earlier this season and is scheduled to see another specialist this week, Nets coach Kenny Atkinson said.

“That’s about all I can tell you,” Atkinson said. “His shoulder continues to bother him. That’s about the extent of it now.”

Kyrie Irving has re-aggravated his injured right shoulder that cost him 26 games and is out indefinitely again, Nets coach Kenny Atkinson confirmed today

Atkinson said Irving will be unavailable for Brooklyn’s first game after the All-Star Break against the 76ers on Thursday. Irving was not at practice on Tuesday night.

Atkinson said he will have a clearer timetable after Irving sees the specialist.

Irving has faced a shoulder injury before in December last year.

Irving saw a specialist in Phoenix in December, but Atkinson said the guard will see a different doctor this time.

“A cortisone shot lasts as long as it can,” Irving said in December. “You either continue to get cortisone shots, which is obviously detrimental to your health and your muscles, or you go get arthroscopic surgery. For me, it’s just about being able to go back out there after the right amount of rehab, the right amount of rest and recovery and see what we can do for the rest of the season and then re-evaluate after a few months.”

Irving has had many problems surrounding his shoulder in the past as well. 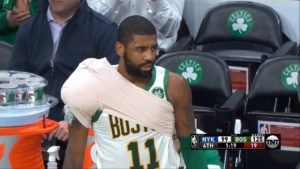 The more troubling aspect of Irving’s situation is that Atkinson added the pain isn’t the result of one single play or moment but rather something that’s been continuously bothering him over time.

“The shoulder is a tough thing,” Atkinson said. “I just think it was an on and off thing where it’s bothering you. Some days you feel good, some days you don’t feel good. But I think it got to the point it was, ‘Hey let’s see another specialist.'”

When asked whether he thought Irving was in danger of missing the rest of the season, Atkinson said he “did not want to go there.”

After missing 26 games earlier in the season due to a shoulder injury, Irving returned to action in mid-January. He played in nine games and put together some magical performances, including 54 points in a win over the Chicago Bulls shortly after Kobe Bryant’s death, but the pain in his shoulder has continued to bother him.

“Obviously, we pray for his health,” teammate Spencer Dinwiddie said. “That’s all you can do.”

It’s obviously way too early to tell what sort of issue is ailing Irving or how long he may be out, but it’s concerning that he’s on his way to visit a second specialist in the past few months. There usually isn’t good news at the end of that road.

How the Brooklyn Nets are affected:

The Nets have actually been slightly better without Irving this season — 8-12 with him, 17-16 when he sits — and this was always going to be a bit of a lost season considering Durant’s injury. Even so, Irving’s injury is worrisome in both the short and long term.

If this ends up being a season-ending problem for Irving, or even something that results in him not being 100 per cent for the playoffs, the Nets have absolutely no chance in the first round.

Is the Miami Heat Trying to Start a Twitter War With the New York Knicks With This Savage Move?

“I Don’t Care If They Score Against Me” : Shaquille O’Neal Enlists His Favourite NBA Players

“Everything We Know is Pulled Out From Under Out Feet”: LA Clippers Star Reveals the Impact of Coronavirus