Sebastian Vettel Offered a Contract for 2021 by Ferrari F1 – Reports

Nikola Jokic may not have the muscles of LeBron James or the hops of Giannis Antetokounmpo. What he does have, though, is an inherent advantage over opponents foolish enough to underestimate him. Jokic feels that being underestimated is his biggest advantage.

“Maybe I just put them in that mindset that I cannot do anything,” Jokic told The Denver Post ahead of his second consecutive All-Star appearance in Chicago. “It’s just a mindset that they have about me.”

Jokic’s favourite moment comes when one of his moves, a slow-motion spin or maybe an up-and-under deke, catches an unsuspecting defender off guard. Nothing is more satisfying than when his defender assumes he’s all out of tricks.

“Oh, yeah, that’s the best thing just because it’s kind of fun to see their faces, to see their reactions when you do something good,” he said.

“I wish I can do all those things, but I can do something else,” Jokic said. “I’m trying to be the best I can be in what I do…It’s a compromise.” 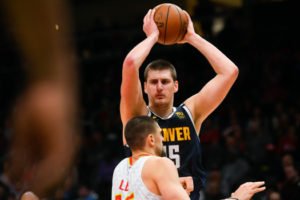 Not many lumbering 7-footers in NBA history have dominated the game like Jokic, and none with his supposed athletic deficiencies.

Through 55 games, Jokic is the only NBA player averaging 20-plus points, 10-plus rebounds and six-plus assists this season. Only six players in history (Wilt Chamberlain, Oscar Robertson, Larry Bird, Kevin Garnett, Russell Westbrook and Jokic in 2018-19) have ever reached those benchmarks. It’s why Nuggets coach Michael Malone has said he could be Hall-of-Fame bound once he’s done imposing his imprint on the game.

Of course, Jokic would love to be able to glide like Antetokounmpo or leap like Philadelphia center Joel Embiid. It’s just not in his arsenal. Instead, he makes up for his physical limitations by keeping his opponents guessing.

In Denver’s Feb. 5 win over Utah, the Nuggets suited up only seven players and were on the second night of a back-to-back. So Jokic toyed with two-time reigning Defensive Player of the Year Rudy Gobert. He logged in 30 points, 21 rebounds and 10 assists. These included a game-clinching, one-footed, fadeaway jumper. Only two games before that he hung 39 points on then-Pistons center Andre Drummond.

“You turn on First Take and ESPN and all those times he’ll have a crazy triple-double, they may show one clip, but like, I just feel like he should get way more recognition,” said teammate Monte Morris, who served up the assist on Jokic’s dagger in Utah. “Every big that’s supposed to be a so-called defender, he goes out there and handles his business and kills him.”

“Any success is good success,” said veteran Paul Millsap, a 14-year champion of fundamentals, “To see him doing what he’s doing, at that size, it’s unbelievable.”

NBA Throwback: A Fitting Battle Between a Young Kobe Bryant and Michael Jordan

Carmelo Anthony Reveals the Time He Got Mad at Kobe Bryant