The NBA playoffs are not only entertaining in terms of the matches, but also for their epic burn moments. One such moment occurred back in 2018 between Stephen Curry and Kyrie Irving. 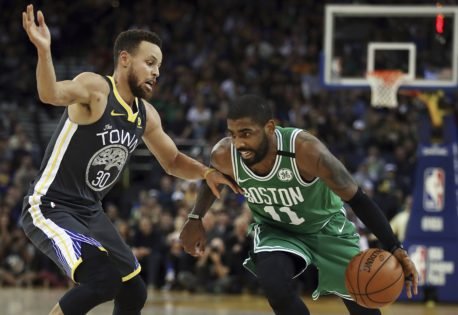 The Boston Celtics played against the Golden State Warriors on 27 January 2018. It was a battle between star point guards in the Warriors’ Stephen Curry and the Celtics’ Kyrie Irving.

The matchup ended with the Warriors’ thrilling 109-105 win over the Celtics at Oracle Arena. Curry and Irving met near center court and gave each other a hug. They exchanged words like respectful sportsmen, and then the seemingly petty incident happened.
After the two shared their words, Kyrie seemed to have immediately turned away at the exact moment that Curry offered him a handshake. The Warriors’ star was left hanging— something which is a nightmare for us regular folks as well.
Stuff like that can be hard to watch. To add fuel to the fire, the scene aired on national TV. However cringy it was, we’re not sure that Irving did this to Curry on purpose. 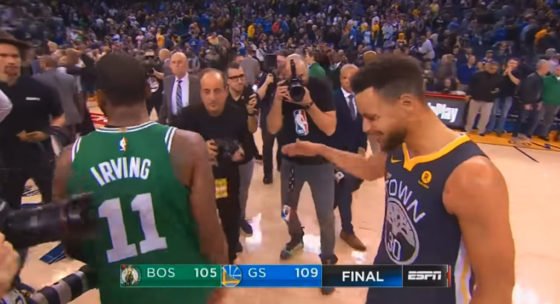 Steph and Kyrie’s praise for each other 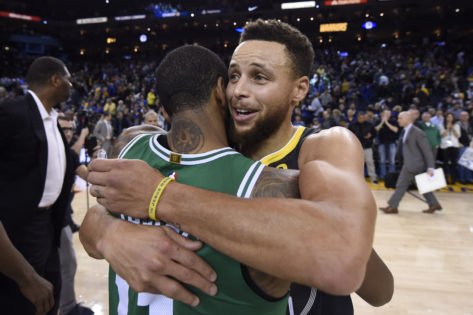 Curry stole the show at Oracle Arena, as the two-time Most Valuable Player erupted for a season-high 49 points on an eye-opening 16-of-24 shots made from the field.

In an article written by Janie McCauley of The Associated Press, Irving reacted to Curry’s explosive night:

“Oh yeah. I’ve been going against him for the last seven years,” Irving said about Curry. “This special team that they have now, adding KD, you’ve seen how they’ve kind of transformed from the first year they won it to now being two-time champions. The bench, everyone. It’s always a high-level game.”

The Celtics point guard had 37 points of his own on an impressive 13-of-18 shot from the field which included a 7-of-7 shooting start to the game.

Curry also had praise for Irving’s performance that night:

“The way he started the game tonight was pretty crazy,” Curry said. “We try to bring the best out of each other. Tonight was one of those nights, just a fun way to play.”

The Warriors emerged victorious in all three games on their homestand during that period. They became the first team in the NBA to reach 40 wins for the third consecutive season.
Surely, that achievement certainly deserves more than just a high five.
Tags
Kyrie Irving Stephen Curry
1 Comment
Maitreyee Joshi March 29, 2020
Share
Tweet
Share
Share
Translate to:

“Guys Like Steph Curry and Michael Jordan”: Peyton Manning Hints at Teaming the Two for Golf