Get ready for a delightful first for the Los Angeles Lakers and their fans. Their third meeting of the season with the Los Angeles Clippers became one of the most anticipated matchups of the year. In back-to-back games, LeBron James outplayed Bucks superstar Giannis Antetokounmpo and Clippers superstar Kawhi Leonard in nationally televised contests.

A frustrated Davis finally hit back at LeBron James’ critics after the Lakers emerged victorious on Friday, winning 113-103 against the Milwaukee Bucks. He said,

“At 35, what this [expletive] is doing is incredible. He is the MVP,” Anthony Davis told Yahoo Sports.

“That’s no disrespect to that [expletive] in Milwaukee. Giannis is having a hell of a year, but if you think about what the most valuable player means, that’s ’Bron to us. Look at our numbers when he’s off the floor. He’s the MVP.”

AD on ppl who don't think LeBron is MVP: "They need to watch the last two games. I mean, what he’s been able to do: taking on matchups defensively, leading the pack offensively, making the right plays, you don’t see that from a guy who is 17 years in the league."

Anthony Davis scored 30 points (on 11/19 shooting), eight boards, two assists and two steals in the Los Angeles Lakers’ 112-103 road win over the Clippers on Sunday. The Lakers ended the Clippers’ six-game winning streak and improved to 49-13, while their city rivals dropped to 43-20. 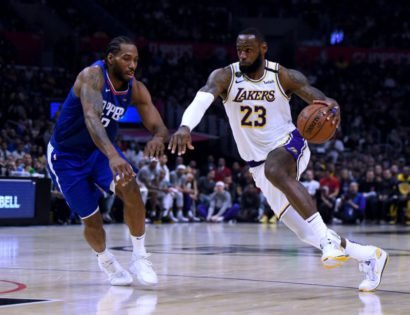 James got to the line 14 times, placing heavy emphasis on attacking the rim, which isn’t an easy feat against the bruising Clippers. He provided the dagger with a drive through the teeth of the defense for an and-one layup late in the fourth quarter.

And when the ball found the bottom of the net, James let out an extended roar.

“I was able to get to the rim a couple times in the fourth quarter. … I’m going to just do whatever it takes for my team to win,” James said. “If my teammates need me to take the challenge defensively, offensively, whatever, I’ll take it. My teammates asked me to do it this weekend and the rest is history.”

James had 37 points, 8 rebounds and 8 assists in Friday’s 10-point win over Milwaukee. He then scored 28 points in Sunday’s nine-point win over the LA Clippers. Two games before that, he had a triple-double in a win over the Pelicans during which he went head-to-head with Zion Williamson.

At the ripe age of 35, James has shown that he can still be among, if not the best player in the NBA this late in his career. Anthony Davis is seeing that firsthand, and making sure the world sees it too.