WATCH: Giannis Antetokounmpo Pulls Off a Jordan and Leaves Everyone in the Arena Baffled

Giannis Antetokounmpo looks like he is a rising legend. More so when he gets compared to actual legends. Here a throwback to when The Greek Freak baffled his opponents.

When Giannis Antetokounmpo got compared with Michael Jordan

The NBA awarded last season’s MVP to Giannis Antetokounmpo, and for good reason. Along with being a good player, he is also an inspiring teammate. Further, Giannis is famous for his dramatic layups.

The Milwaukee Bucks star proved that he deserved his awards on Game 4 in 2019. One of his layups got compared with the NBA legend, Michael Jordan.

In the second quarter, Antetokounmpo raced to the basket, preparing himself for a huge dunk over the Pistons’ Andre Drummond.

Mid-air, Antetokounmpo realized he could not dunk over Drummond. So, as he fell back down towards the wood, he brought the ball down away from Drummond’s arms. Then, he used both his hands to put it back up for the layup, plus the foul.

One must watch the video to feel the hype. Drummond’s reaction also tells us everything. He couldn’t believe Giannis actually made that shot!

Many said that the play was equal or better than Michael Jordan’s iconic, right-to-left layup.

Is it bad of me to say this is better than MJ’s double pump switch hands thing..? https://t.co/KyJXaiGwNL

Don’t fail me now Internet: Need a side by side of Jordan v Lakers & the Giannis right to left switch tonight … Not the same but close enough that I want to see it… #Bucks

Shades of MJ: Giannis hangs in the air for a Jordanesque finish https://t.co/GsT3jACKBV

Jordan’s layup took place in Game 2 of the 1991 NBA Finals between the Chicago Bulls and Los Angeles Lakers. The legend sensed Sam Perkins would try to block his dunk attempt semi-transition. He put all his athletic skills to use in the fourth quarter by switching hands mid air and kissing a left-handed layup off the backboard.

When Drummond got his revenge 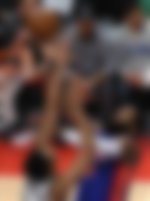 Later last year, Drummond made sure he got his revenge on Antetokounmpo for making the play that compared him to legends.

With about six minutes left in the first quarter, Pistons guard Langston Galloway found Tony Snell open in the corner. Snell rose for the shot but dished it off to Andre Drummond in the middle instead. Drummond  threw it down on top of Antetokounmpo as well as Bucks seven-footer Robin Lopez, hence getting his revenge.

Giannis just got a taste of his own medicine from Andre Drummond 💀 pic.twitter.com/WEXIfGg5Fr

The Detroit Pistons drafted Drummond No. 9 overall in 2012. Since then, Drummond has transformed into one of the best centers in the league. He became an absolute menace on the boards, leading the NBA in the category in three of the last four years.