To find success, you have to work really hard. It is an often mentioned statement that without any pain, you get no gain. If you ask the athletes who have made it to the NBA, they would tell you the same. Every single player with a professional contract in his hands would have put in the extra hours to get better and get recognized. And the story of current Lakers player JaVale McGee is no different.

JaVale McGee had no significant success in the NBA before he joined the Golden State Warriors. McGee entered the league in 2008, after he was drafted as the 18th overall pick by the Washington Wizards. After spending four years in Washington, he quickly moved between three teams before signing for the Warriors in 2016.

Two-time NBA champion JaVale McGee had an inspiring message to share with the upcoming ballers. The 32-year old posted a picture of his childhood home mentioning that he acquired the photo from his aunt.

McGee wrote a long caption derived from the bottom of his heart. The Lakers player wanted to deliver a pure message about the benefits of working hard through his post. McGee will currently be living in a luxurious mansion as a result of his humungous salary. But he doesn’t want to forget the root that paved the way for all the success that he has earned.

By posting a photo of his childhood home, McGee wants to instill the fact that your childhood roots and dedication at a young age will never fail to take you places. The 7-foot center mentioned that he never thought he’ll make it this big while growing up.

“The reason I posted this is because I wanted to tell that child (guy or girl) in a neighborhood like where I’m from and you’ve lost hope,” McGee wrote. “KEEP PUSHING, FOCUS, DO THE RIGHT THINGS BUT DO IT YOUR WAY! AND LASTLY BELIEVE IN YOURSELF!”

Fellow teammate Kyle Kuzma showed his respect by sharing McGee’s post and calling him a “real flint” on his Instagram page. McGee is now a role player with the Lakers and he currently averages 6.8 points and 5.8 rebounds per game for the team. 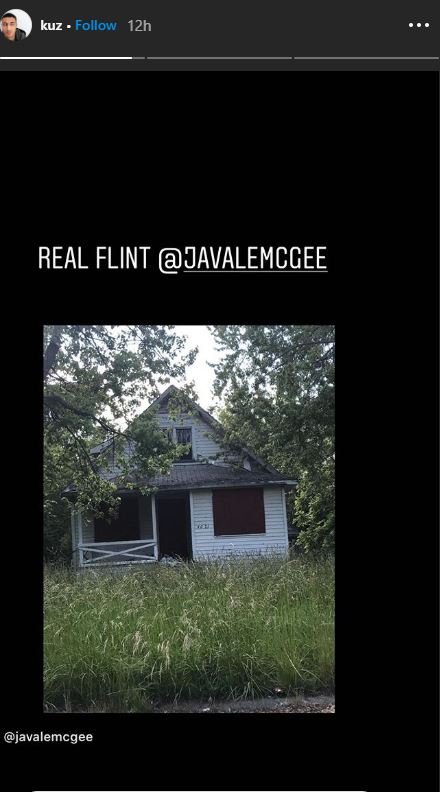 “I Would Trade Kyle Kuzma for A..”: NBA Analyst Takes a Massive Dig at Lakers’ Forward