In the last few years, Golden State Warriors have had an amazing run in the NBA. The things they have achieved with the likes of Stephen Curry, Klay Thompson, and Kevin Durant are truly inspiring for other teams.

While their success might have inspired many, one Warriors fan for motivation to work on his fitness from two Warriors individuals. When the Warriors signed Dutmeant in 2016, he immediately made an impact on the team. The Warriors won two consecutive titles in 2017 and 2018. With Durant still in the team along with others, the Warriors looked set for a three peat but for injuries.

Durant remained out with a calf strain for the 2019 Western conference finals. Although the Warriors eased past Portland Trail Blazers in the series, they found it difficult in the finals against Toronto Raptors.

Durant returned for Game 5 but stayed only for one quarter before an Achilles injury ruled him out. The Warriors were already trailing in the series. The next game it was Thompson who suffered a torn ACL.

The Warriors might have lost the Finals but one Warriors fan, as per Clutch Points, found motivation from the two Achilles injuries.

At the end of the season, Durant made a move to Brooklyn Nets after a successful stint in San Francisco. Thompson, meanwhile, signed a contract extension with the Warriors. 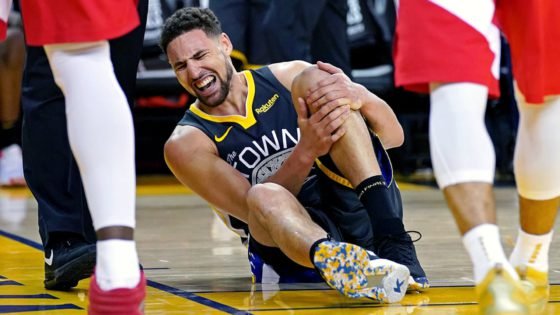 Both Thompson and Durant were ruled out for the season and are yet to fully recover.The Warriors had a dismal 19-20 season in absence of their star players. The team that had made it to the last five NBA Finals were the first to be eliminated this season. Prior to the league’s suspension, they were at the bottom of the Western Conference with the worst record in the NBA.