“For Me It’s All About The Oval”: Kevin Harvick Wants NASCAR Cup Series to Keep Racing on The IMS Oval

Isiah Thomas is one of the best point guards of all time. He is underappreciated for his achievements but some of it was brought to light during the Last Dance documentary. Recently, while talking to NBA analyst Rashad Phillips, Thomas spoke about his rival Magic Johnson, calling him the “smartest basketball player” he has ever played with.

Thomas said, “When you brought the game to the ground, you gotta play chess. He was a great chess player on the ground and he had all the pieces.”

I’ll deliver my Isiah Thomas documentary. He breaks down his favorite matchups, childhood, college recruiting, and the secret for small NBA PG’s to win big. This is Zeke UNCUT. Here he breaks down @MagicJohnson in rare form. See you in church on Saturday doors open at noon. 🍿 pic.twitter.com/fz6EHWOMcF

Along with a high basketball IQ, Johnson also had the versatility to play literally any position. In his rookie season during the 1980 NBA Finals, he stepped in to play center, despite being a point guard. Kareem-Abdul Jabbar was forced out with an injury and Johnson decided to take over. So in Game 6, Johnson recorded 42 points, 15 rebounds, and seven assists as he carried the Lakers to their seventh championship.

Before Game 1 of the 1988 NBA Finals, Magic and Isiah had a brotherly embrace, as they kissed each other on the cheek. After that, it was all business. Rivals first, brothers second. The series went back and forth but the Lakers managed to come on top. James Worthy dropped 36 and 10 as he led the Lakers to victory in Game 7 of the Finals. 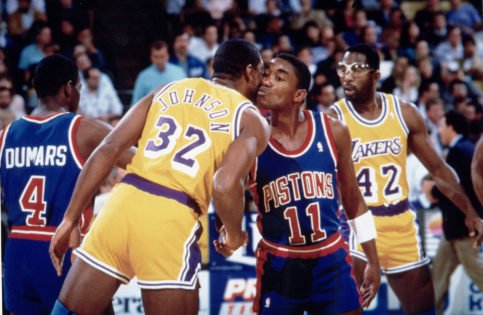 But the relationship between Thomas and Johnson spiraled after Magic announced he had contracted HIV in 1991. Johnson blamed Thomas for spreading rumors about him being homosexual. Then in 1992, Johnson prevented Thomas from being a part of the 1992 US Olympics Basketball team, also called the Dream Team. But the popular story was Michael Jordan’s rivalry with Thomas, which cost him a place in the team.

They had reportedly reconciled, but then in 2009, Johnson released his book and Thomas found out that it was Magic who was responsible for him not being in the Olympics, and not Jordan. Thomas issued a statement saying, “I’m really hurt, and I really feel taken advantage of for all these years. I’m totally blindsided by this. He and I would go out to dinner in New York. I didn’t know he felt this way.”

Then finally, in 2017, they buried the hatchet in an emotional meeting. Johnson said, “Let me apologize to you. If I hurt you. That we haven’t been together,” leaving behind their troubled past.