“It Meant Everything”: When Michael Jordan Wore a Competitor’s Sneakers for the First Time in a Game

Kobe Bryant became the first player to have two numbers retired by the same team. That’s right. The Los Angeles Lakers retired Kobe’s #8 and #24 honoring the achievements the mamba has brought into the team. Furthermore, before Kobe passed away, he wanted a certain teammate’s number to be hanging on the rafters alongside his jerseys.

Kobe Bryant won back-to-back NBA championships in 2009 and 2010. Though he didn’t have Shaquille O’Neal to help him scale the peak, there was another guy hailing from Spain who shared Kobe’s burdens. His name is Pau Gasol, a fan-favorite among the Laker fans.

When Gasol joined the team in 2008, he instantly hit it off with Kobe. The latter wanted to win a few championships and made sure that Gasol was on the same page as him. The pair had a dynamic relationship, complementing each other very well. Even after retiring Kobe stayed in touch with his former teammate. Their friendship was certainly special.

Kobe Bryant urged the Lakers organization to retire Pau Gasol’s #16 and hang it on the rafters where ten other jerseys are hanging, excluding the ones belonging to Kobe. It is a special recognition for a player to have his jersey retired, and the Lakers’ greatest ever player wanted the team to shower Gasol with that honor.

Speaking to Antonio Martin of EFE in 2018, Kobe made his thoughts clear about the back-to-back triumphs in 2009 and 2010. “There’s no debate. Pau, when he retires, he will have his number in the rafters next to mine,” he said.

“The reality is, I don’t win those championships without Pau. The city of L.A. doesn’t have those two championships without Pau Gasol. We know that, everybody knows that, and I really look forward to the day that he’s there giving his speech at center court in front of all of the fans that have supported him over the years. It’s going to be an awesome night.” 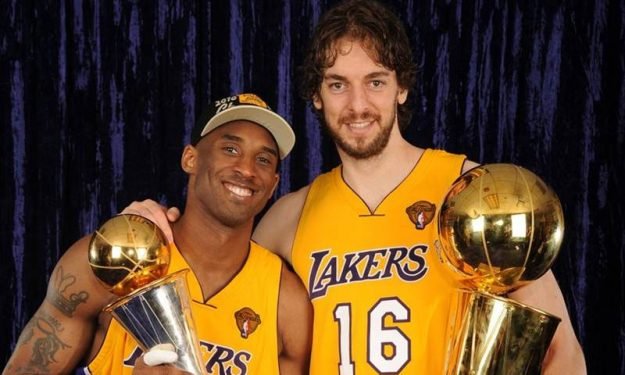 Furthermore, the mamba was all smiles and cheerful when he delivered this message. He was very much inspired by Gasol’s contributions to the team in their glory days. Moreover, the Spaniard also acknowledged the idea of it and deemed it an honor if it were to happen.

Speaking to Ryan Ward of ClutchPoints, he said, “It will be an honor if it does happen. It would be a privilege to be in that group. He explained his desire on wanting it to happen and what it means for the fans as well. “It means a lot to me that the fans would like to see that. It will be beyond my dreams to be able to experience that.”