When the Los Angeles Lakers acquired Anthony Davis via trade, they were expected to be a title-contending team. They might have bid adieu to talented youngsters like Brandon Ingram and Lonzo Ball, but in return, they got a top 5 player in the league. This put pressure on the franchise to bring home the Larry O’Brien trophy even more.

At the start of the offseason, the Lakers only had three players on the roster. They waited till the end for Kawhi Leonard, only for him to join rivals Clippers. Consequently, they missed out on a lot of free agents but still managed to build an experienced team.

But if you pair LeBron James and Anthony Davis on any team, you are expected to win the title. So far the Lakers managed to stay on course for it, although they have faced a few bumps.

“It is absolutely a failure if the Lakers don’t win the championship. When your best player is in his 17th season there is no guarantee he’s going to stay at this level next year. There is no moral victories. They should be looking championship or bust.” — @Chris_Broussard pic.twitter.com/pImN73MdTR

When you have LeBron and AD on your team, you certainly feel confident on the court. Lakers’ guard Alex Caruso says that their whole locker room believes they will only be satisfied at the end of the season if they win the championship. “The team we have with L.A. is star-studded and people expect us to be there. We don’t have to talk about it, we know that’s our only purpose. If we don’t win it, it’s a failure, basically. That’s our goal, to win a championship.” 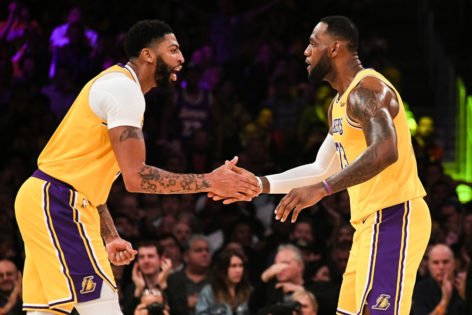 When the Lakers won the championship on the NBA2K20 simulation, AD says he wanted to emulate it on the court.  “Given the realism of NBA 2K and their past predictions, it’s cool to see our potential get recognized. It makes you excited to get back on the court and try to bring a real ring to Los Angeles!”

With the NBA planning on directly resuming with a 1-16 seeded playoffs, Lakers will have some interesting matchups. They successfully avoid the Clippers, Bucks, and the Celtics till the NBA Finals. But they would still have to beat the likes of the Nets, Rockets, Nuggets, or even the Raptors.

“There are Going to be Parts of My Game That You Didn’t See Before”: Zion Williamson Issues a Word of Caution to His Rivals

“Just No Dates”: Los Angeles Clippers Coach Gives a Peek at Life Inside the Orlando Bubble